Who Was the First Woman in the World to Get Pilot’s Licence? 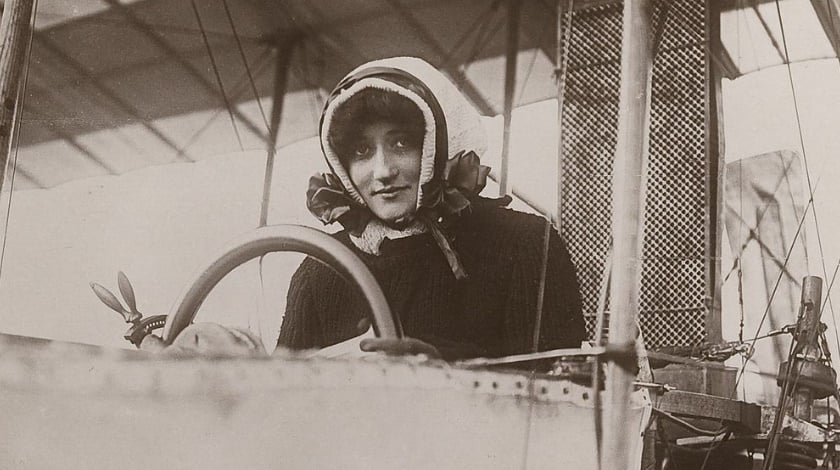 On this day, 8 March, on the International Women’s Day, the whole world devotes the very special attention to women. To their achievements, their bravery and courage.

In aviation this day also bears a very symbolic meaning and has its very own memorable occasion to mark.

I believe you would agree that aviation is the industry of extremely strong women. One of them was Raymonde de Laroche.

Exactly on 8 March in 1910 Raymonde de Laroche became the first female pilot to obtain a licence.

Nevertheless, her great deeds in aviation did not limit to this achievement only. The French lady gained many ‘firsts’ and set a number of records.

She was one of the first women to pilot a powered heavier-than-air craft, she set two women’s altitude records as well as the women’s distance record.

On this day I suggest you getting better acquainted with this lady, who devoted her life to aviation and was absolutely fearless in her beginnings. 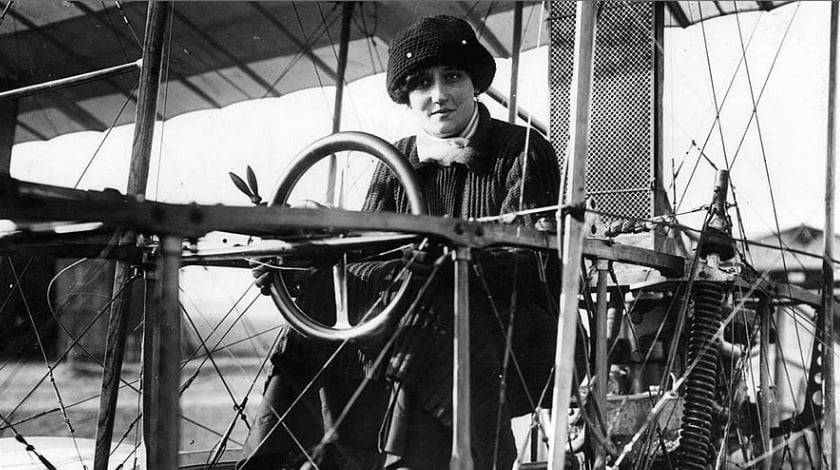 Prior to Flying, Career of an Actress

Prior to becoming famous, Raymonde de Laroche was called Elise Raymonde Deroche. As a child Elise dreamt of growing up a singer, dancer or an actress. At the same time, therefore, the girl showed keen interest in sports, motorcycles and later in automobiles.

When the time came, one of the childish dreams came true, the young lady became an actress. However, after entering the acting world, Elise came to the conclusion that her own name was not very suitable for the stage.

Nevertheless, the passion for technologies did not abandon Elise. 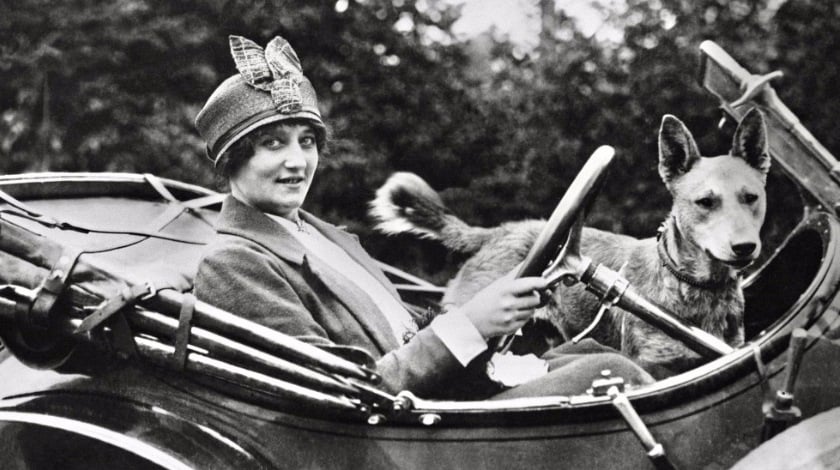 Flight with One of Famous Wright Brothers

During the 1900s world’s close attention was turned to Wright Brothers. Their triumphal entry into the history of aviation by inventing, building, and flying the world’s first successful plane inspired a lot of young aviators, indeed. Raymonde de Laroche was not an exception, even being a lady.

Wilbur Wright came to Paris for demonstrations of powered flight. He was also performing aerial displays offering rides to women in the crowd.

No surprise that one of the ladies who accepted this exclusive offer was a young actress Raymonde de Laroche. In fact, this flight was the turning point that marked the beginning of her love affair with aviation.

Actress Lifts off the Ground During the First Lesson

While enjoying aircraft from the ground, the French lady got acquainted with many aviators. Among them was aviation pioneer and aeroplane builder Charles Voisin.

The sensation of the flight with Wilbur Wright was still too strong to abandon her. Thus, it was Charles Voisin who Raymonde de Laroche asked to teach her to operate the plane on the French flying grounds at Chalons.

Charles Voisin together with his brother Gabriel manufactured a single-seater plane called the Voisin. Due to the fact that the aircraft was designed for only one person, a student was instructed by the trainer from the ground.

During her initial lesson French actress made her first taxi trip around the field. At that time she was not supposed to fly.

However, Raymonde de Laroche dared to open up the throttle, race down the airstrip and rise about 15 feet in the air. She handled the controls by herself.

The flight was not long, but still marked her maiden flight on the very first lesson. 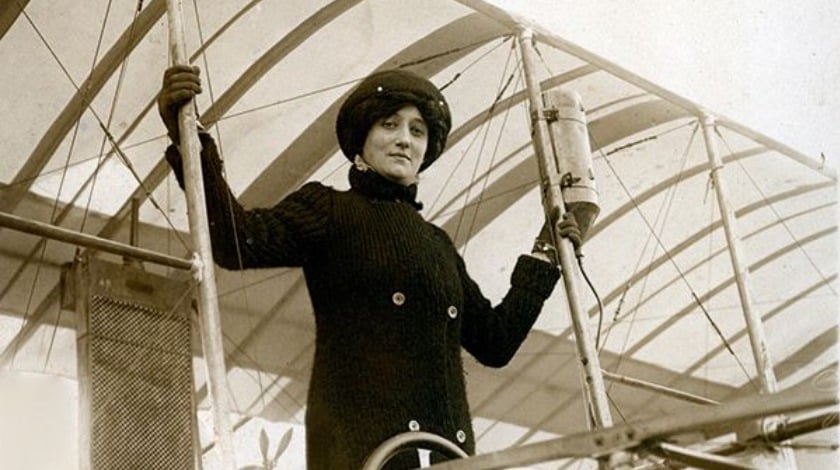 First Licence, New Title and Meeting with a Tsar

She was practicing for several months and became more confident in piloting the aircraft. Even a stronger bond between her and aviation formed.

In February of 1910, after sustaining some injuries the month before, she did not give up and travelled to Egypt to participate in air competition with the Voisins. She came in eighth.

The next challenge was the Fédération Aéronautique Internationale. This is where the crowning moment approached.

On 8 March, 1910, Raymonde de Laroche became the first woman in the world to get a pilot licence. 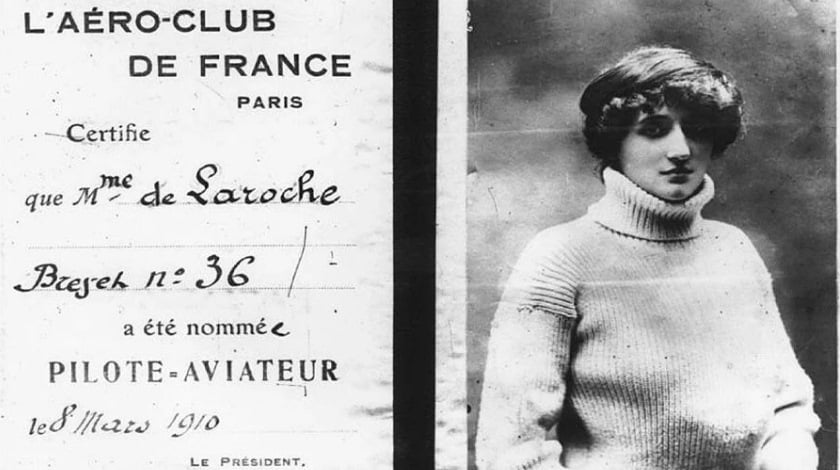 The year of 1910 appeared to be extremely full of important milestones for Raymonde de Laroche, though. After receiving her pilot licence, the woman took part in the aviation show in Saint Petersburg, the capital of the Russian Empire.

During this show Raymonde de Laroche was introduced as ‘Baroness de Laroche’. Worth highlighting that she was personally congratulated by the Tsar Nicholas II, who was astonished with her flying skills.

Even though the royal title was far from her not royal background, she bore it for the rest of her life.

It is commonly said that no pain, no gain. After her major success French pilot ended 1910 not in the best way. After getting back from the show in Saint Petersburg, another events approached, in Budapest, Normandy.

The last for upcoming two years was the competition in Rheims, France. Raymonde de Laroche was the only female pilot to participate.

However, this time the event was not fruitful for Baroness de Laroche. She was involved in a crash and suffered serious injuries (broken arm and both legs).

Important to note that the circumstances of the crash were very controversial and resulted in the words of wisdom saying that flying is not for ladies. Who knows, maybe this was the birth of a stereotype about women in aviation.

For somebody injuries or psychological pressure could have meant the end of attempts. But this was not the case for the courageous French aviator.

From Flying to Driving and Back

In two years, after quit a long recovery, with new energy and new strength Baroness de Laroche was ready to take her pilot seat and conquer great heights.

She entered the flying competition for women he Coup de Fémina. Although some personal problems prevented her from flying, she finally managed to cover the distance of 321.8 kilometres (200 miles) nonstop in four hours.

However, her pilot career was temporarily brought to a pause as the First World War began. Flying for a woman during such dangerous times was not allowed.

But Raymonde de Laroche was not satisfied with a role of an ordinary female spectator – she decided to serve as a military driver.

Nevertheless, as soon as the war ended, she got back to aviation with new plans. In 1919 she supplemented her collection with another milestone and set a women’s altitude record of 4,785 meters (15,700 feet). 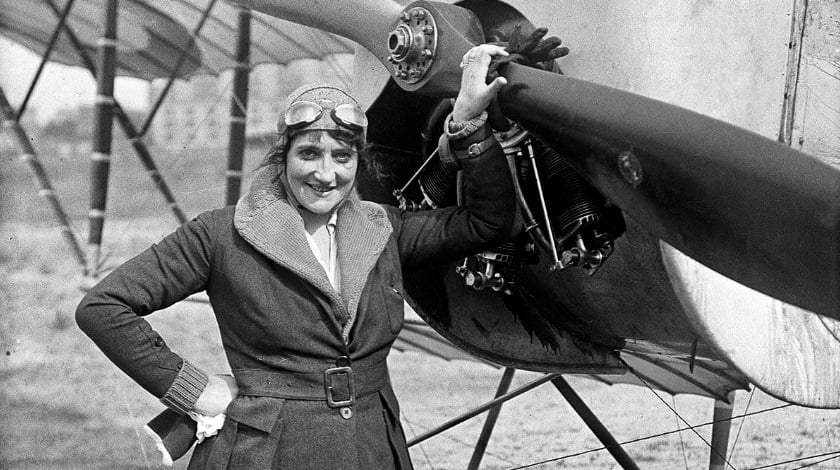 Even taking into account all the achievements, Raymonde de Laroche still felt it is not enough for her and she could do even more. Thus, she decided to become first female test pilot.

Unfortunately, she did not pass her own test. On 18 July, 1919, when Raymonde de Laroche was visiting the French airfield Le Crotoy, she was offered to ride with a test pilot in an experimental Caudron.

The flight seemed to go right and smooth up until the landing phase when the aircraft went into a dive resulting in the death of both Baroness and the pilot.

The figure of Raymonde de Laroche is still well-known, remembered and drawn as an example of courageous woman. At Paris’ Le Bourget Airport in France you can even see the statue honouring the very first woman in the world who received a pilot licence.