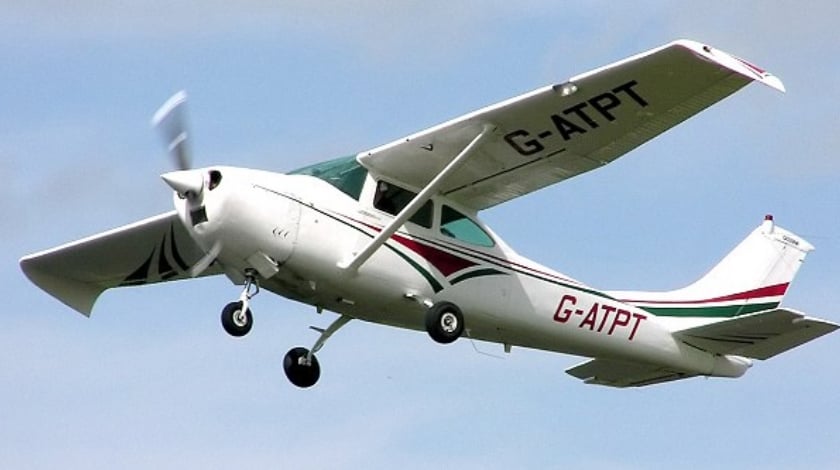 A skydiving plane crashed moments after takeoff from Port Allen Airport on Monday, killing all five people on board.
Witnesses said the Skydive Kauai plane appeared to be having engine trouble when it burst into flames in the air, and then crashed into rocks just outside the airport’s fence line.

The crash happened about 9:30 a.m., and a pilot, two skydive instructors and two tandem jumpers were on board. The jumpers were visitors to the islands. Officials said four of the victims were pronounced dead at the scene. The fifth, an adult male, was taken to Wilcox Memorial Hospital where he was later pronounced dead.

Cisco Campos, a retired Air Force aircraft mechanic, said he was fishing Monday morning when he saw the Skydive Kauai plane take off and noticed that the engine sounded strange. He said the plane was only about a flag pole’s height off the ground when the engines appeared to be sputter and then cut out. Campos said the plane looked to be turning back to the airport when the engine caught fire and burst into flames.

The plane “fell out of the sky,” Campos said, and exploded on impact.

Authorities said the plane that crashed was a single-engine Cessna 182H. The National Transportation Safety Board has been notified, and will be investigating the cause of the crash.

The crash sent plumes of heavy smoke into the air, and sparked a small brush fire. The charred remains of the aircraft were being secured Monday, and were expected to be transported to a hangar for further investigation.

Kauai Fire Department Chief Robert Westerman said getting to the crash scene was difficult, as it was on a rutted, dirt road. Among those on the plane was skydiving instructor Enzo Amitrano, 43, who was being remembered Monday as a fun, warm and outgoing husband, brother and friend.

“He was just the kind of guy who was easy to get along with,” said his brother, Marco. “He was really outgoing, super-friendly. It’s like one of those really charismatic personalities that would draw people in. He was always the center of groups he was in.”

Amitrano, who spent years working as a skydiving instructor in Chicago, is survived by his wife. Kauai Mayor Bernand Carvalho said his thoughts were with the victims and their families.

“The most tragic thing is a loss of life,” he told Hawaii News Now. “Five people lost their lives today so our love and aloha goes out to the families.”

Port Allen Airport is primarily used for scenic helicopter tours, ultralight aircraft traffic and skydiving, according to its website. Skydive Kauai operates out of the airport. The identifies of the victims have not been officially released. Life’s Bridges, a grief counseling service, is assisting the families of the victims.