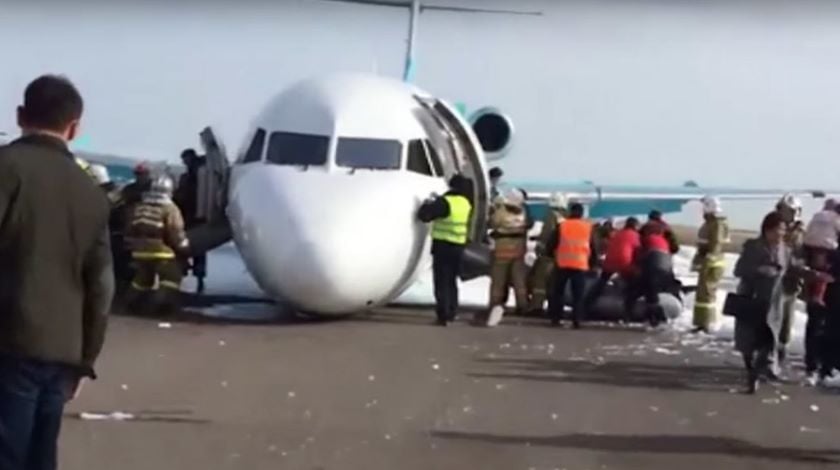 Kazakh pilots safely landed a passenger plane without the use of its front wheels after a malfunction in the aircraft’s front landing gear on Sunday. Video of the miraculous landing immediately emerged online.

The incident took place when the Fokker 100 aircraft operated by Kazakh airline ‘Bek Air’, which had departed from Kyzylorda, was landing at Astana International Airport on Sunday morning. The pilots realized the front wheels were malfunctioning when the plane was already in descent.

“So far we know that the landing gear was not coming out,” airline board chairman Nurlan Zhumasultanov, told Russian news agency RIA.

“The plane’s commander took an expert decision to land without the front landing gear. The plane landed on girt pads and leg doors. The aircraft received minimal damage, it can be restored,” Zhumasultanov added.

After receiving news of the malfunction, the airport crew covered the runway with foam to minimize friction. The plane touched down some 45 minutes later than scheduled, after making several loops around the airfield.

All 116 passengers and five crew members on board the Bek Air plane landed safely, with no injuries reported.

A criminal investigation has been launched under a law called “Violation of safety rules and operation of air transport”. The cause of the mishap will be investigated by a special commission of the Ministry of Investment and Development of Kazakhstan, which manages air traffic and safety.

Morning flights at Astana International Airport were delayed due to the incident, but the airport is now operating as usual.