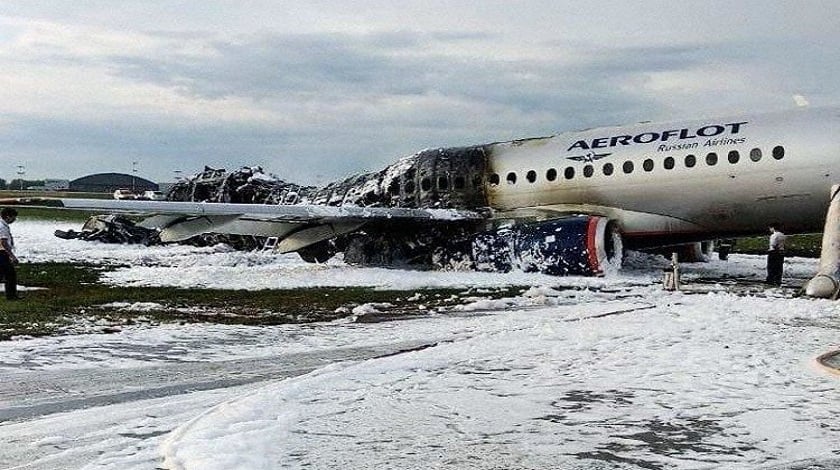 According to the latest data from the investigation team, the deadly accident took the lives of 41 people onboard of the Sukhoi Superjet 100 operated by Aeroflot on 5 May.

Aeroflot Sukhoi Superjet 100-95 was performing a flight SU-1492 from Moscow to Murmansk when it went for emergency landing and burst into flames at Sheremetyevo airport, leaving at least 13 passengers dead.

The aircraft carried 73 passengers and 5 crew. According to the Russia’s Investigative Committee, two of 13 victims were children.

Reportedly, the SSJ100 of Aeroflot stopped the climb and attempted for emergency landing amid lost radio communication and emergency via transponder codes.

However, the first attempt was unsuccessful and the aircraft, after striking the runway several times, managed to land only on the second attempt.

During landing the plane burst into flames, veered left off the runway and came to a stop on the grass adjacent to the runway. Emergency services reported the fire was extinguished about 45 minutes after landing.

Therefore, the reasons of fire are not known yet. Although Aeroflot on its website reported that the SSJ100 “suffered an engine fire upon landing after being forced to return to Sheremetyevo International Airport due to technical reasons”.

Meanwhile, Sukhoi Civil Aircraft in a statement said that “SSJ100 performing its flight Moscow-Murmansk returned to the airport of departure upon receipt of the information about the abnormality aboard. After tough landing the aircraft was burned down”.

Also, the plane manufacturer reported that the aircraft involved in a fatal accident was produced in August 2017. It was under scheduled maintenance in the beginning of April 2019.

The images and videos on the Interned show that with a help of crew passengers were being evacuated via two slides in the front of the plane.

The Investigative Committee has opened a case into safety violations that led to the deaths.