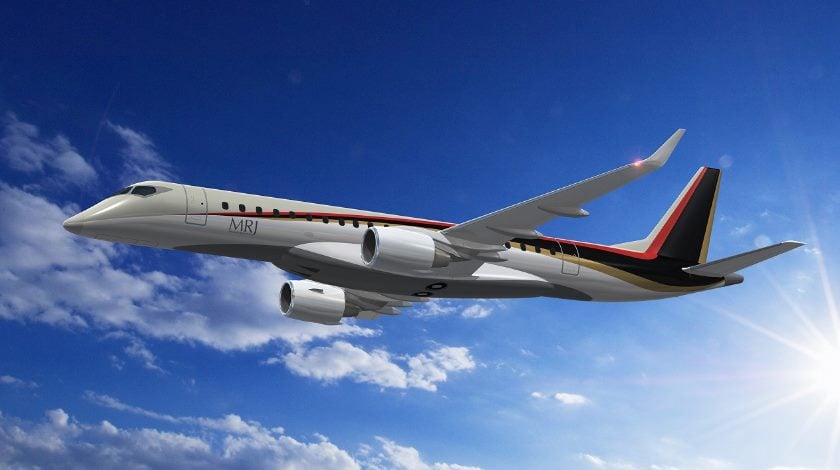 Mitsubishi Aircraft Corporation and Aerolease Aviation, LLC, an aircraft leasing company based in the United States, announced today that they have signed a Letter of Intent (LOI) for an order of ten firm MRJ90 aircraft with an option to an additional ten MRJ90 aircraft. Based on this LOI, both companies will move forward to conclude a definitive agreement in the near future. The LOI testifies to the high regard in which Aerolease holds the asset value of the Mitsubishi Regional Jet (MRJ), the next-generation regional jet. Aerolease is the launch lessor in MRJ program to select the MRJ. Deliveries to Aerolease are scheduled to commence in 2018.

Aerolease Aviation, LLC is an aircraft leasing company based in Miami, Florida. With the first order of brand new aircraft, the company aims to make a leap forward by exploring a new market of the MRJ as a partner. Jep Thornton, Partner, Aerolease Aviation is an aviation expert, who has been in aircraft leasing and trading business for more than 30 years and is the Immediate Past- President of the International Society of Transport Aircraft Trading (ISTAT), an organization that represents approximately 4,000 members worldwide who are involved in leasing, trading and financing aircraft.

Thornton said, “The accumulated experiences in aircraft manufacturing and strong financial background of the Mitsubishi group are great value to us. Moreover, we are extremely impressed with the MRJ’s state-of-the-art aerodynamic design, Pratt & Whitney’s game-changing GTF engine and the state of the art avionics suite from Rockwell Collins, which will make the MRJ the superior aircraft to its competitors. These factors encouraged us to move forward to select the MRJ for our portfolio. Aerolease is committed to cooperate with Mitsubishi Aircraft as an MRJ partner to promote MRJ in regional jet market and to expand its global customer base.”

“This launch lessor order from Aerolease has a significant importance for the MRJ program,” said Hiromichi Morimoto, President, Mitsubishi Aircraft Corporation. “We recognize the significantly important role which aircraft lessors have been playing in the aviation industry. We are proud to add a lessor partner to our order book at this very early stage of the MRJ program. We firmly believe that the asset value of the MRJ has been recognized in the aircraft finance market. This LOI will not only bring a positive impact on the lessor community, but will also contribute to expanding our airline customer base.”

Thus far, 407 MRJ aircraft are on order and 20 will be added to its order book when Mitsubishi Aircraft signs a definitive agreement with Aerolease Aviation. The total of 427 MRJ aircraft include 233 firm orders with 170 options and 24 purchase rights.

Mitsubishi Aircraft anticipates demand of about 5,000 aircraft in the regional jet market over the next twenty years. Demand for regional aircraft is expected to increase for both airlines and leasing companies. This LOI with Aerolease enables the company to accelerate sales efforts in the regional jet market. Mitsubishi Aircraft remains firmly committed to the success of the MRJ program as well as the growth of Japan’s aviation industry.

Founded in 1986, Aerolease Aviation, LLC is a privately owned aircraft leasing company headquartered in Miami, Florida in the United States. Aerolease has been an active market maker in the conversion and leasing of used aircraft. Current portfolio consists of over 40 owned or managed Boeing B757 aircraft leased globally.