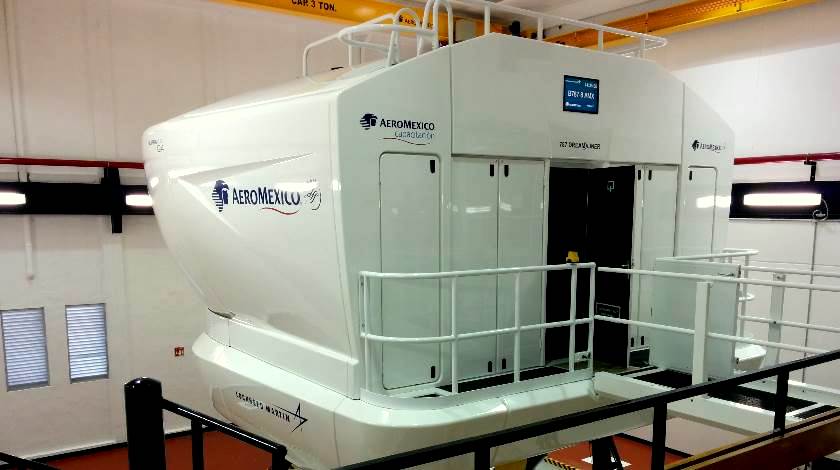 With the arrival of the new simulator, Aeromexico can optimize scheduling and control of the pilot training process, in addition to streamlining the availability and productivity of their employees.
The new device has been qualified by the Directorate General of Civil Aviation (DGAC) to Level D, the highest recognition that a simulator receives from the authority in terms of aviation safety and operability. The simulator is equipped with more than 30 different specific visual scenes, including Mexico City International Airport, London and Paris.

Andres Conesa, CEO of Aeromexico, stated, “We are very proud to be the first airline in Mexico and Latin America that implements the Boeing 787 flight simulator, considered one of the most advanced training tools into the market. With the addition of this simulator, more than 200 pilots flying our nine Boeing 787s, and a total of 19 Boeing 787s in the future, can continue training using the best devices. “

Sandy Samuel, vice president of LMCFT, said, “We’re honored to join Aeromexico in celebrating the Level D qualification for the first B787 simulator in their country. We have delivered a technologically advanced simulator, tailored for Aeromexico’s sophisticated flight training needs as their pilots and crews support the increasing marketplace for global travel and commerce.”

Thus, Mexico’s flag carrier continues its strategy of technological renovation to benefit not only external customers, but also its more important and demanding asset, its crews and employees. This action complements its constant fleet renewal, update and upgrade of its Boeing 737 and Embraer flight simulators, development of web platforms, mobile applications and use of social networks.

About Grupo Aeromexico
Grupo Aeromexico, S.A.B. de C.V. is a holding company whose subsidiaries are engaged in commercial aviation in Mexico and the promotion of passenger loyalty programs. Aeromexico, Mexico’s global airline operates more than 600 daily flights and its main hub is in Terminal 2 at the Mexico City International Airport. Its destinations network features more than 80 cities on three continents, including 46 destinations in Mexico, 16 in the United States, 16 in Latin America, three in Canada, three in Europe and two in Asia.

As a founding member of SkyTeam, the airline alliance which this year celebrates its 15th anniversary, Aeromexico offers customers more than 1,000 destinations in 179 countries served by the 20 SkyTeam airline partners rewarding passengers with benefits including access to 636 premium airport lounges around the world. Aeromexico also offers travel on its codeshare partner flights with Delta Air Lines, Alaska Airlines, Avianca, Copa Airlines and Westjet with extensive connectivity in countries like the United States, Brazil, Canada, Chile, Colombia and Peru.

About Lockheed Martin
Headquartered in Bethesda, Maryland, Lockheed Martin is a global security and aerospace company that – with the addition of Sikorsky – employs approximately 126,000 people worldwide and is principally engaged in the research, design, development, manufacture, integration and sustainment of advanced technology systems, products and services.