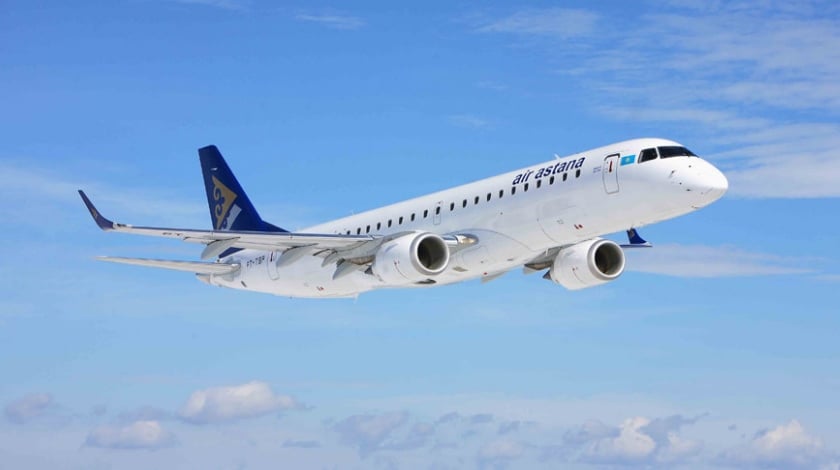 Kazakhstan’s national carrier Air Astana has signed a contract for five new re-engined Embraer E190-E2 narrowbodies. Deliveries are scheduled to begin in the fall of 2018, the airline announced.

CEO Peter Foster explained earlier that the fleet renewal is expected to increase the carrier’s yields on short-haul flights.

“The new Embraer E190-E2s, along with the Airbus A320neos which are being delivered to us, are cutting-edge aircraft with a low fuel burn. All the measures we are taking will facilitate further growth of our business efficiency and improvements to our product,” Foster said.

Air Astana currently operates previous-generation E190s, which seat 97 passengers. The new -E2, which is to enter the market in the first half of next year, will have a seating capacity of between 88 and 106.

The new aircraft will replace the airline’s E190s, whose lease term expires in 2019. The carrier was also considering the Airbus A319neo and the Bombardier CSSeries as replacement options. Foster said earlier that the A319 was in fact the most plausible option, since Air Astana had already placed a firm order for 11 larger aircraft of the family: A320neos, A321neos, and A321neo LRs.

In the first half of this year the carrier reported a 12% year-on-year traffic increase to 1.894 million passengers. Of this number, 1.007 million traveled within Kazakhstan (up 4%), and the remaining 887,000 traveled internationally (up 22%). The airline’s transit traffic surged 62%.

“Kazakhstan’s economy is demonstrating a slight revival after the recent two challenging years, and we expect that the recovery will speed up as the economy diversifies,” Foster commented. “

The growth of international traffic is really promising, especially within our own route network. The Expo 2017 international show, further lifting of visa restrictions, the inauguration of the new terminal at Astana’s Nursultan Nazarbayev International Airport, and our continuous improvement efforts have all contributed to the passenger traffic recovery. Although our costs have surged following the growth in fuel prices in Kazakhstan, our unit costs remain at competitive levels, which enables us to increase our share in the long-haul segment.”