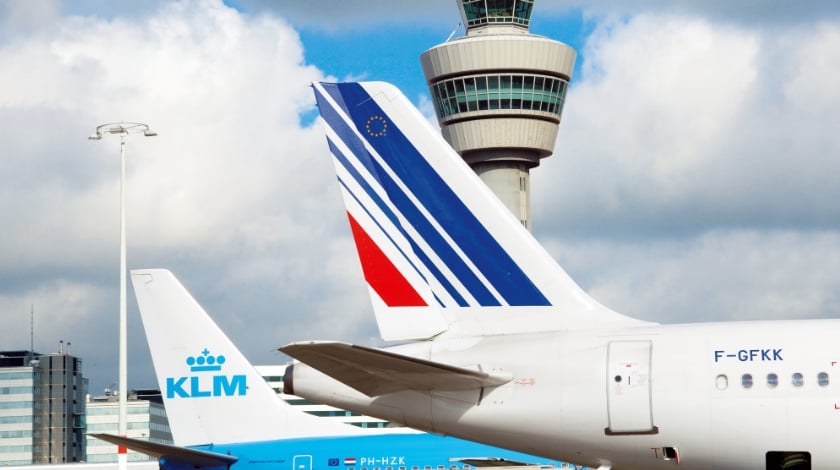 Air France-KLM Group has reported a first-quarter net loss of €155 million ($175.3 million), narrowed from a €559 million net loss in the year-ago period.

“Air France-KLM is continuing to deliver a clear improvement of its financial indicators in the first quarter of 2016, leading to a significant increase of its operating result while continuing to reduce its net debt,” outgoing Air France-KLM Group chairman Alexandre de Juniac said in a statement.

“Despite a difficult environment marked in particular by the Brussels attacks, the upgraded product offer, the commercial efforts and the ongoing network adaptation have enabled the Group to limit the unit revenue decline and to retain a substantial part of the fuel savings, while unit costs have decreased during the quarter in line with the objectives set at the beginning of the year.”

First-quarter revenues rose to €5.6 billion, up 0.4% on the prior-year period. “Currencies had a positive €95 million impact on revenues versus 1Q 2015, primarily driven by the strengthening of the US dollar against the euro partly offset by the weakening of other currencies,” the company said. “[However] negative impact on costs reached €174 million, including a lower tailwind from currency hedging compared to 1Q 2015 … the net impact of currencies thus amounted to a negative €79 million.”

The group’s first-quarter operating expenses totaled €5.7 billion, down 4.9% YOY, resulting in an operating loss of €99 million—a €318 million improvement over the Group’s €417 million operating loss in 1Q 2015.

Air France-KLM indicated its 2016 outlook remains highly uncertain regarding fuel price and unit revenue due to geopolitical and economic fluctuations as well as the continuation of the industry’s overcapacity situation on several markets.

“As a consequence, the group expects the forecasted savings on the fuel bill to be significantly offset in the coming quarters by unit revenue pressure and negative currency impacts,” the company said. “Under these conditions, the group is maintaining its expectations for 2016. The 2016 investment plan (between €1.6 billion and €2 billion) and disposals program (between €0.2 billion and €0.5 billion) will be adjusted depending upon operating cash flow generation.”

For the full year, the group is now expecting to post a 1% unit cost reduction, as well further significant reduction in net debt.

“In the framework of [our] Perform 2020 plan, we confirm our ambition to improve our competitiveness within a global context that remains uncertain,” de Juniac said.