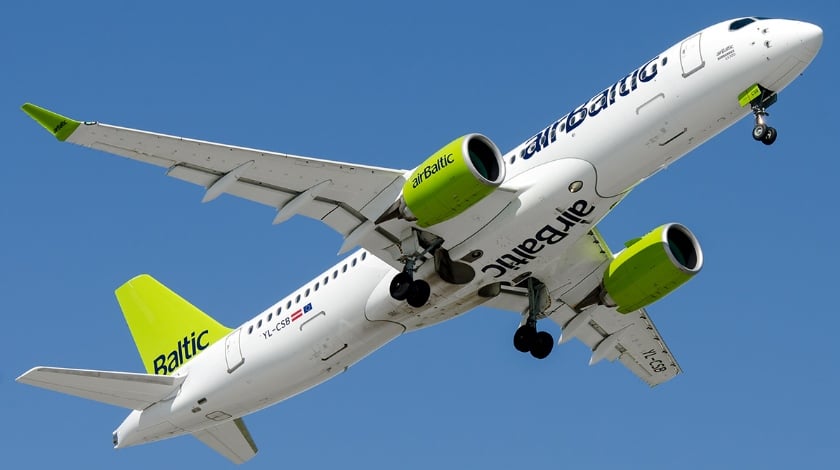 Latvian carrier airBaltic, which is in the process of being reprivatized, plans to phase out its 12 Bombardier Q400s and replace them with either CSeries or Embraer E195-E2s.

“We will be announcing an order to replace the Q400s. The decision to replace our Q400s with jets has already been taken, so it just a question of when we announce the order. The turboprop era is over, so we are going jet,” airBaltic CEO Martin Gauss told ATW in an exclusive interview.

Riga-based airBaltic currently operates 12 Q400s. This was meant to rise to 14, but the airline is sticking at 12 after taking the decision to transition to an all-jet fleet. The Q400s will come off lease around 2021-22, although airBaltic is considering bringing in the jet replacements around 2019-20 and subleasing the Q400s until the end of their terms.

Gauss said the E195-E2s and CS100/300 are in the running for the order, which would cover at least 14 replacement aircraft and possibly more for growth. The final selection has not yet been announced.

Riga-based airBaltic already operates seven CS300s and has another 13 awaiting delivery. The next aircraft will arrive in October or November, but then there will be a break until late spring, with the next six aircraft will join the fleet through summer 2018.

AirBaltic has the option to swap CS300s for CS100s, but this requires a two-year lead time, which has already passed on its existing order. The E195-E2 is appealing, as it shares the same engine as the CSeries.

Gauss said he hopes the order announcement will come this year, but it partly depends on what happens with airBaltic’s privatization. The airline is hoping to secure a new shareholder by the end of 2017.

The airline is 20%-owned by Danish entrepreneur Lars Thuesen, who owns Danish wet-lease operator Jet Time. The remainder is held by the Latvian government.

Since spring, Gauss said several airlines have shown interest in the government stake, including some who joined the process later. He declined to comment on how many potential bidders are in the running, but added that the interested parties have been given access to airBaltic’s data. Others can still join the process, if they are able to meet the year-end target date.

Most likely airBaltic will next communicate when it has secured a binding offer that is being finalized, rather than giving interim updates on short-listed bidders.

The main goal of the Latvian state is not the monetary bid, but to ensure that Latvia remains connected. “The state doesn’t have to sell. Thanks to our capital increase two years ago and our operating profit, we have sufficient funds for the foreseeable future. For the long term, beyond our current business plan, we would need investment,” he said.

AirBaltic is having a good year. In the year to July, revenues and passenger numbers were both up 20%. Operating costs have fallen, delivering an increased operating profit, but one-off costs from the CSeries transition have had a “big impact on the business” affecting net profits.

“It’s been an incredible year on the passenger side, better than we planned. As it looks now, we will have the best year in the company’s history,” Gauss said. The fleet changeover to the CSeries will continue to have an impact in both 2017 and 2018.

AirBaltic is pursuing a strategy to link the Baltic region with major hubs, like Abu Dhabi and Amsterdam, offering one-stop flights worldwide through codeshare and interline agreements. The airline has added 13 new routes this year and announced another five for 2018, with more to follow. Asia is a region where airBaltic is looking to establish connectivity.