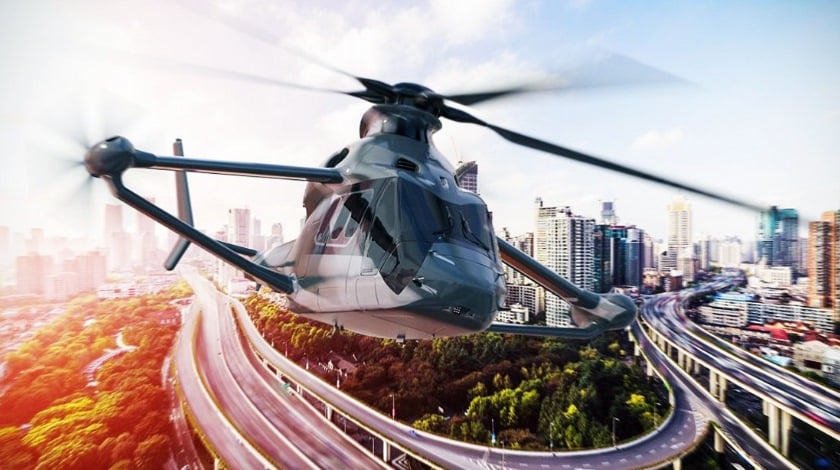 Emergency workers and the obscenely rich love helicopters, and for good reason. Unlike airplanes, whirlybirds can take off and land almost anywhere, making them just the thing for tight spots and urban areas. The drawback, though, is speed. Choppers are slow.

While Gulfstream’s G650 private jet streaks along at north of 600 mph, conventional choppers like the police or your local traffic reporter might use maxes out around 160 mph. Quick, but not that quick when talking about flight.

Airbus thinks it found a way of closing the speed gap without sacrificing a helicopter’s inherent advantages: add wings and props to create an aircraft that can take off and land vertically, hover, and cruise at a heady 250 mph.

Airbus calls it the Racer, for Rapid and Cost-Effective Rotorcraft. You just know it came up with the name first, then found the words to make it work.

The idea is to find a way around the physics that limit the speed of a conventional helo. With any helicopter, the top rotor provides lift as the blades slice the air. When the helicopter is flying forward, air moves around the the blade spinning in the direction of travel faster than it does around the retreating blade on the opposite side, causing something aerodynamicists call dissymmetry of lift.

The faster you go, the more severe the effect and the less stable the helicopter. Aerodynamicists know how to compensate for most of that, but the challenge mounts as the blades approach the speed of sound. An advancing blade hitting the sound barrier creates aerodynamic instabilities engineers cannot compensate for.

So Airbus engineers added two short wings extending from each side of the fuselage. The wings meet at a point and support a rear-facing prop driven by the engines turning the main rotor. In forward flight, the wings provide additional lift, and those small props provide additional propulsion.

All of this allows the helo to achieve higher speeds without pushing the main rotor into an aerodynamic red zone.

Jean-Brice Dumont, the company’s head of helicopter engineering says the design makes the Racer faster, more fuel efficient, and cheaper to operate. Of course, this being a prototype, Airbus didn’t mention any specifics on fuel economy of operating costs. But the engineering is solid.

“The concept of compound helicopters, using one or two pusher fans and small wings along with the main rotor, is not new,” says Mo Sammy, director of the Aerospace Research Center at Ohio State University. “What could be new is the claim of efficiency and affordability, if materialized.”

Although every futuristic aircraft seems to include electric motors these days, Airbus is sticking to a tried and tested powertrain here. Two Rolls-Royce turboprop engines power the main rotor and auxiliary propellers. However, Airbus is exploring a “stop-start” system that will shut down one engine during low speeds or light loads. Think of it as “eco” mode for the sky.

Airbus sees a market for its machine that could rival private planes for city to city transport among jet setters in a hurry. Emergency services could benefit, too—a higher top speed could mean a shorter flight to hospital.

Airbus hopes to make the first flight in 2020. Commercial service could follow five to 10 years later. Just enough time to start saving up.