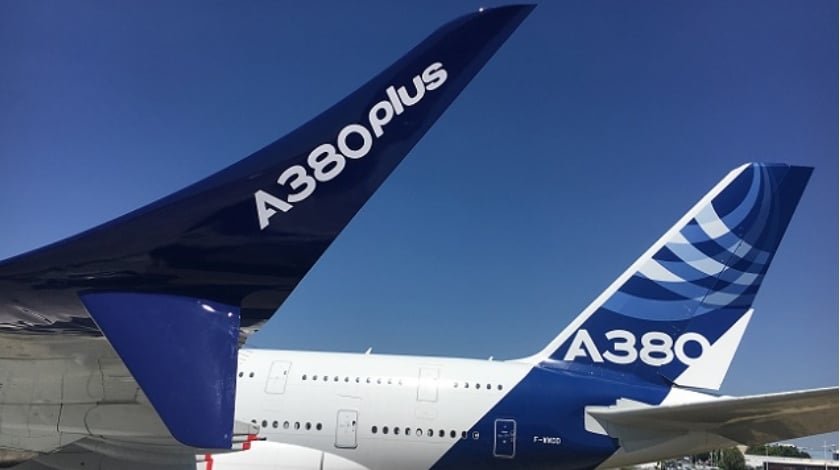 Changes as designed for the A380plus upgrade package will be available for entry-into-service by 2020, according to A380 marketing head Frank Vermeire.

Airbus gained authority to offer the package, but has not yet received firm commitments from either existing or new customers. The A380plus project targets a cash operating cost reduction of 13% to be reached through changes to the wing, maintenance intervals and cabin lay-out.

Customers can pick only parts of the upgrade, which would reduce the cost improvements. Airbus says the A380plus will burn up to 4% less fuel than the current version of the aircraft.

The winglets will be 4.7 meters high. Airbus installed mock-ups at the MSN04 test aircraft displayed in Le Bourget, but the actual devices have not yet been built nor has a supplier been picked. Wing changes also include upper belly fairing improvements and wing camber modifications increasing height by 33 millimeters between rib 10 and rib 30.

The wing will also be slightly retwisted. “We have a better understanding of wing aerodynamics,” Vermeire said. The wing changes are now being looked at “mainly as a line fit” and Airbus is looking at the option of retrofitting winglets at a later stage.

Vermeire dismissed the option of a re-engining that Airbus studied earlier as part of the A380neo proposal.

Airbus Commercial Aircraft President Fabrice Bregier said earlier this month there was “no business case” for the A380neo.

Airbus also decided to pick up some technologies developed for the A350 and put them back into the A380. That applies to the inflight entertainment system, the flight management system (FMS) and the fuel pumps. Vermeire said the upgrade will reduce weight and improve reliability. The later technology FMS will also help reduce fuel burn, he stressed.

Airbus also feels comfortable with stretching maintenance intervals for light and base maintenance. Light checks will in the future be required after 1,000 hours, compared to the current 750 hours.  Downtime at heavy checks is also reduced.

Airbus claims that overall the maintenance changes will allow airlines to keep the aircraft flying for an additional six days per year.

The third part of the A380plus study are cabin densification initiatives proposed at the Aircraft Interiors Expo (AIX) in Hamburg earlier this year.The changes, if all implemented, would free up room for up to 80 additional seats. That would airlines to raise seat count in four classes from the current 490 to 570 seats.