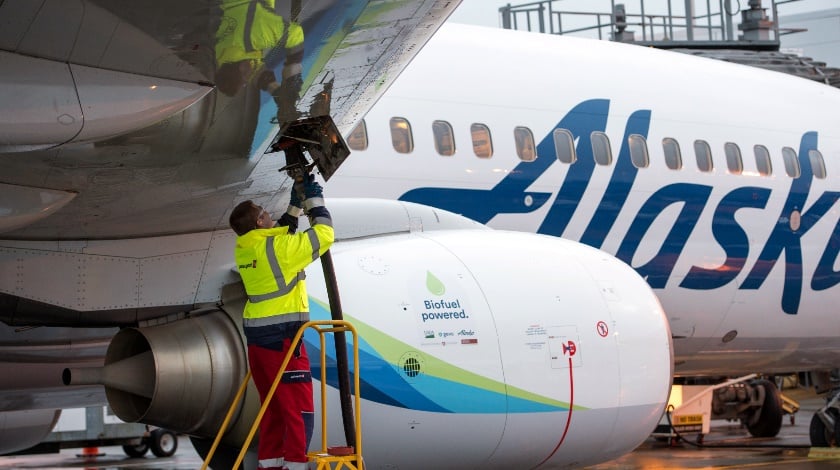 Alaska Airlines Flight 4 made history when its Boeing 737-800, with 163 passengers on board, flew from Seattle-Tacoma International Airport to Reagan National Airport in Washington, D.C. – the first ever commercial flight to use an alternative renewable jet fuel made from forest residuals.

The biofuel was produced by the Northwest Advanced Renewables Alliance (NARA) which is led by Washington State University, NARA being a five-year project which commenced in 2011 and which combines the resources of 32 member organizations from industry, academia and government laboratories.

Sourced from tribal lands and private forestry operations in the Pacific Northwest, Geco, Inc, an NARA partner, succeeded in adapting its patent technologies to produce isobutanol from cellulosic sugars obtained from wood waste. Thereafter, the isobutanol was further converted into Gevo’s Alcohol-to-Jet (ATJ) fuel. This is believed to be the world’s first alternative jet fuel derived from wood, while the fuel meets international ASTM standards.

The fuel blend was 20% sustainable aviation biofuel which is chemically indistinguishable from regular jet A fuel and is derived from the branches and limbs that remain after the harvesting of managed forests that are usually burned after the timber harvest.

1,080 gallons of biofuel were used on the flight, and though having a minimal impact on the carrier’s greenhouse gas emissions, it has been estimated that were Alaska Airlines to replace 20% of its entire Sea-Tac Airport fuel supply with Gevo’s ATJ, it would potentially reduce greenhouse gas emissions by approximately 142,000 metric tons of CO2 – the equivalent of removing 30,000 passenger vehicles off the road for a year.

In a statement from Alaska Airlines, their senior vice president of communications and external relations, Joe Sprague, said that “This latest milestone in Alaska’s efforts to promote sustainable biofuels is especially exciting since it is uniquely sourced from the forest residuals in the Pacific Northwest. NARA’s accomplishments and the investment of the U.S. Department of Agriculture provide another key in helping Alaska Airlines and the aviation industry reduce its carbon footprint and dependency on fossil fuels.”

In June of this year Alaska Airlines flew two other flights which used a blend of biofuel produced from non-edible, sustainable corn.