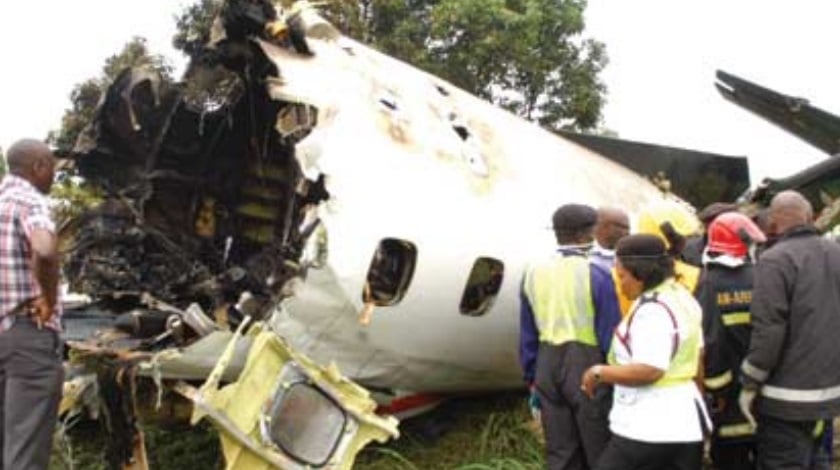 A transport plane chartered by the Congolese army crashed near Kinshasa on Saturday, killing at least 11 people, military and airport sources told AFP.

The Antonov transporter had just taken off with “several dozen people” onboard, heading for the eastern region of Kivu, where the army is fighting militia groups, an airport official told AFP, speaking on condition of anonymity.

The plane went down at N’sele, about 100 kilometres (60 miles) east of Kinshasa, capital of the Democratic Republic of Congo (DRC), the source said.

A local official in the area of the crash told AFP there were “no survivors”.

AFP reporters saw that the country’s Republican Guard had erected a barrier around the crash site, in an uninhabited area that formerly housed an agro-industrial complex.

The plane, which had a Russian crew, was carrying “two vehicles and weapons” as well as military personnel, a source at the army’s headquarters told AFP, also speaking on condition of anonymity.

He said there were “between 20 and 30 people” on board when it took off from Kinshasa’s Ndjili airport.

However, a commander at the airport, George Tabora, told AFP that “there were no passengers onboard.”

“There were only crew members because it’s a cargo plane,” he said, without saying how many were onboard, or their nationality.

A witness at the crash site told AFP he had seen the plane “falling” out the sky shortly before 9:00 am but said there was no sign of any smoke coming from the aircraft.

But another witness, an army lieutenant, contradicted that account, saying that the aircraft caught fire in mid-air before crashing and that there was a series of explosions on the ground.

A woman whose house is less than 500 metres (yards) from the crash site told AFP: “It was the explosions that caught my attention. It was like a war.”

A senior officer at the site described the plane as a twisted wreck, with mangled bodies strewn around.

Smoke was stilling rising from the wreckage hours afterwards, AFP journalists saw, though they were prohibited from taking videos or photos by soldiers on the perimeter, guns at the ready.

A passenger who had been unable to board the flight at Ndjili said the plane’s destination was Bukavu, capital of the sub-region of Sud-Kivu, which lies on the frontier with Rwanda.

Fighting broke out there on September 24, and was followed on Thursday by clashes in Sud-Kivu’s second largest city, Uvira, which is on the border with Burundi.

At least three transport planes have crashed in the DRC since 2000.