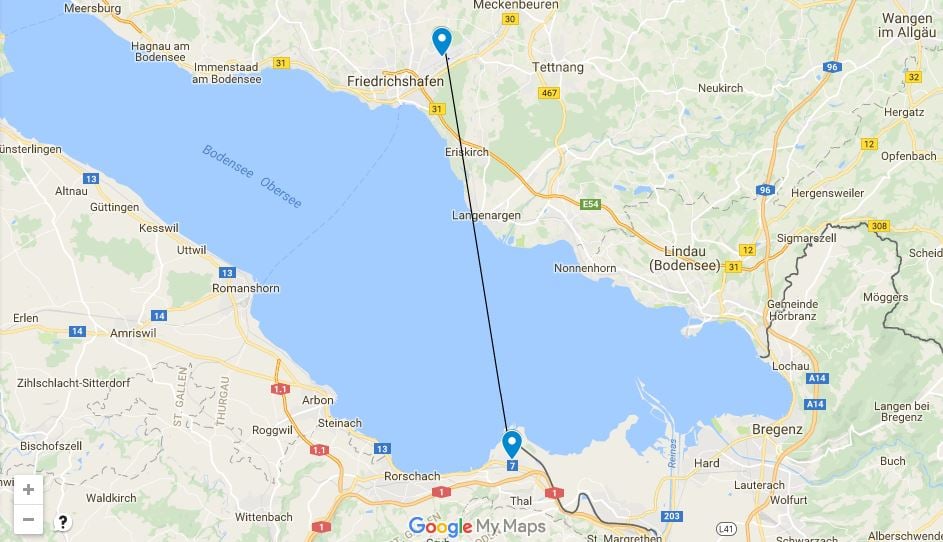 A contender for the world’s shortest international flight – covering just 13 miles and lasting as little as eight minutes – has been launched by an Austrian airline.

People’s Viennaline, founded in 2010 but with just four destinations on its route map, has announced plans to link St. Gallen–Altenrhein Airport in Switzerland with Friedrichshafen Airport in Germany.

While the two are just 13 miles apart as the crow flies, they are separated by Lake Constance, meaning cars must make a trip of almost 40 miles, taking around an hour according to Google Maps.

Now the airline hopes travellers will be willing to pay €40 (£34) for the chance to cut their journey time by flying.

While it is highly unlikely any will use the service to travel direct from one to the other – checking in and negotiating airport security would surely cancel out any time savings – it believes the short hop will appeal to those connecting with its other routes, such as Friedrichshafen to Cologne or St Gallen to Vienna.

The twice-daily flights, listed at 20 minutes in duration on its website but likely to last considerably less, will begin on November 2.

Austrian airlines have previous form when it comes to brevity. FlyNiki, based in Vienna, previously claimed the world’s shortest international service, a 30-mile trip from the city to Bratislava, the capital of Slovakia. That 30-mile journey took 10 minutes by air, but has been discontinued.

The world’s shortest domestic flight is the famously succinct route between Westray and Papa Westray in Orkney, operated by Loganair.

The distance between the two locations stands at slightly more than a mile and can be travelled in as little as 47 seconds, depending on the direction of the breeze.

Another curt service, from Toronto’s Billy Bishop Airport to Niagara District Airport, was launched this summer. That journey takes a relatively tedious 12 minutes.

At the other end of the scale, Emirates currently operates the world’s longest non-stop flight, an arduous 8,825-mile, 17-hour schlep from Auckland to Dubai.