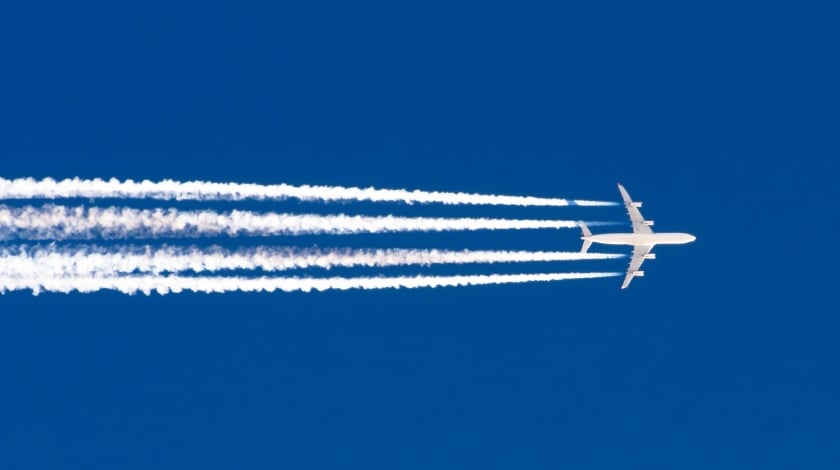 Since the first commercial flight in 1914, the aviation industry has completely changed and grown to a major transport business. Rapid population growth is increasing aviation popularity and more frequent usage.

For example, in 2011 2.8 billion passengers travelled by the air, whereas in 2016 the number grew to 3.6 billion air travellers. Therefore, these numbers will increase as the population numbers are still rising.

Aircraft, as any other vehicle, uses a lot of fuel. For instance, a plane like a Boeing 747 generally uses 1 gallon of fuel (about 4 litres) every second. Over the course of a 10-hour flight, it might burn up to 36,000 gallons (150,000 litres). Due to fuel consumption such greenhouse gases as carbon dioxide, methane and nitrous oxide enter the atmosphere.

All these gases cover up to 3% of the EU’s total greenhouse gas emissions and more than 2% of global emissions.

By 2020, global international aviation emissions are projected to be around 70% higher than in 2005 and the International Civil Aviation Organization (ICAO) forecasts that by 2050 they could grow by a further 300-700%.

Air transport does not only contribute to the increase of gas emissions, it also produces noise. Aircraft noise is noise pollution produced by any aircraft, or its components, during various phases of a flight. Noise can be the issue for the people who live near airports: it can affect their sleep, psychological condition, annoyance and may influence the quality of life.

What is done to reduce environmental problems?

To scale down the emissions from aviation, in 2012, there was set up an EU emissions trading system which required all airlines to monitor, report and verify their emissions, and to surrender allowances against those emissions. Therefore, this system appeared to be successful – the aviation sector reduced its carbon footprint by 17 tonnes per year.

Meanwhile, to cut back noise pollution – all commercial aircraft must meet the International Civil Aviation Organization (ICAO) noise certification standards like avoiding over-flying sensitive sites such as hospitals and schools.

Biofuel for aeroplanes may also come a solution to reduce aviation’s carbon footprint. Biofuels were approved for commercial usage in 2011. Although, there are some difficulties like biofuel oxidation, especially at lower temperatures some additives improve the cold weather tolerance of biodiesel.

On the other hand, biofuel is hard to produce due to a major demand for it. Despite that, biofuel can be involved in aeroplane’s fuel by small portions. NASA has determined that 50% aviation biofuel mixture can cut air pollution caused by air traffic by 50-70%.

Engineers are working to upgrade the plane’s structure for it to become more environmentally friendly. One of the solutions – laminar plane wings. These wings weaken the aerodynamic force and reduce turbulence.

Another solution is regional aircraft which is made to be as light as possible and has technologies that reduce noise. Also, teams are working on ecodesigns. These designs have the lightest, least polluting (paint), most recyclable materials and are aimed at optimising the aircraft’s trajectory as well as to managing energy flows in the aeroplane, getting rid of fluids, pipes and equipping planes with electronic devices to reduce CO2 emissions.

What can we do?

Individually we may be involved in environment friendly air travel. Before planning a trip, it is advisable to search for a daytime flight. Planes reflect some sunlight away from earth in addition to locking warmth into the atmosphere. Also, we can reduce emissions by limiting our luggage. The other thing we can do is choose budget airlines. Budget airlines always have more passengers on each flight and mostly have younger, more fuel-efficient fleets.