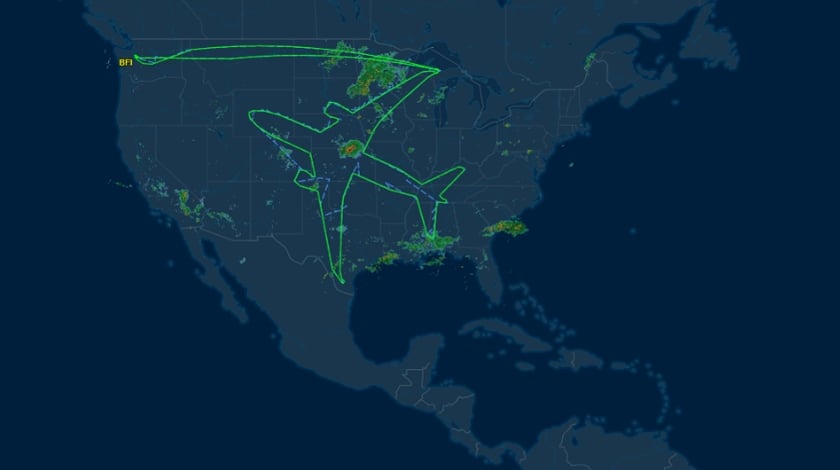 All new planes have to go through an endurance test to ensure they’re passenger-ready, which is what a Boeing 787-800 Dreamliner was conducting.

However, the routine test went off the rails – or off the clouds, rather – when it turned back toward Seattle, where it originated, after flying about 2,000 miles. Then it turned again. And again, setting itself off southwest toward South Dakota before once again changing course and banking to the right.

Flightradar24 was showing the flight path of the Dreamliner – and creating a lot of curiosity for its viewers. No, the pilot wasn’t drunk, as someone on Twitter commented. This was part of a much larger plan of the pilot – which started to become clear around Colorado.

The Boeing 787-800 Dreamliner was drawing a portrait of itself in the sky.

The 18-hour selfie flight gave a lot of people a chuckle, but this isn’t the first time the Boeing team has taken a clever spin on their mandatory aircraft tests. According to a statement made to The Washington Post from Boeing spokesman Doug Adler, Jr., his team likes to go outside the box:

“Rather than fly in random patterns, the test team got creative, flying a route that outlined a 787-8 in the skies over 22 states.”

The flight made sure no one forgot where it came from though. Adler, Jr. goes on to say in his statement:

“The nose of the Dreamliner is pointing at the Puget Sound region, home to Boeing Commercial Airplanes. The wings stretch from northern Michigan near the Canadian border to southern Texas. The tail touches Huntsville, Alabama.”

The plane landed safely back at its Washington campus, surely passing its test with flying colors.