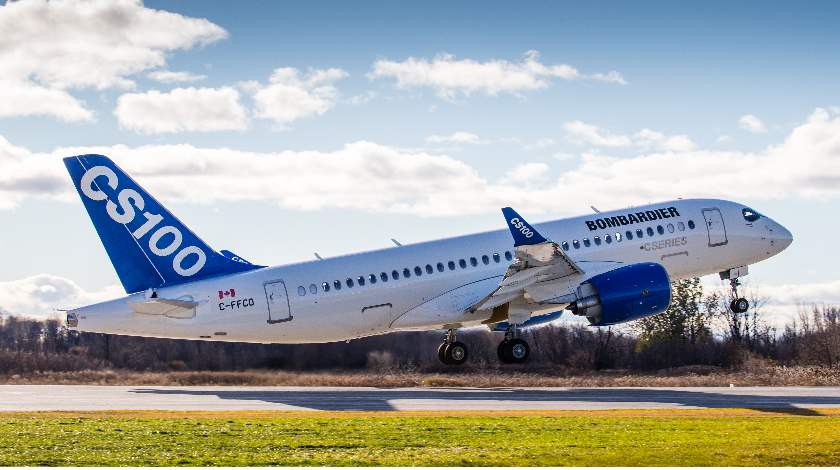 Bombardier Commercial Aircraft announced that it has commenced CS100 aircraft route-proving exercises in Europe. The month-long program is underway with a dedicated CS100 route-proving aircraft operated by Bombardier from launch operator Swiss International Air Lines’ (“SWISS”) base in Zurich, Switzerland. The route-proving exercises are scheduled to include main European cities such a Brussels, Vienna and Warsaw. Additionally, Bombardier also confirmed that the last of eight flight test vehicles – the second CS300 aircraft – successfully entered the flight test program in Mirabel, Québec last week.

The European route-proving program is being conducted as SWISS readies for the CS100 aircraft’s entry-into-service (EIS). The airline’s first CS100 aircraft is scheduled to be delivered by Bombardier in Q2 2016.

“As the launch customer and the first airline that will operate the CS100 aircraft, the European route- proving program is very important to us and will provide a real indication of how the aircraft will operate in our network when we take delivery of our first CS100 aircraft in the next few months,” said Peter Wojahn, Chief Technical Officer, Swiss International Air Lines.

“The CS100 aircraft continues to attract curiosity and keen interest when visiting airports around the world and now, it will be spotted in cities across SWISS’ network — performing as if already a member of the airline’s fleet,” said Fred Cromer, President, Bombardier Commercial Aircraft. “It’s an exciting time as we look forward to these flights and to the close collaboration with our friends at SWISS — together we are preparing for the C Series aircraft’s entry-into-service. The route-proving flights will bring the C Series aircraft closer to the flying public in Europe who will ultimately be amongst the first in the world to fly aboard the aircraft – the first all-new airliner built for the 100- to 150-seat market in close to three decades.”

“March is turning out to be a very productive month for the C Series aircraft program. In addition to the next phase of route-proving, last week we celebrated the first flight of the eighth and final flight test vehicle. It’s only the second CS300 flight test vehicle in the program and one that is equipped with a full production interior,” said Rob Dewar, Vice President, C Series Aircraft Program, Bombardier Commercial Aircraft. “We’re delighted that its test program, which is dedicated to cabin and interior certification, is off to a great start and progressing extremely well.”

The CS100 aircraft will conduct route-proving flights using typical airline flight routings and operational procedures. The flights give a really good indication of how the C Series aircraft will perform in a typical airline schedule to and from different airports. Airfield performance, landings, airport turnarounds and on-ground operations are some of the important characteristics that will be observed.