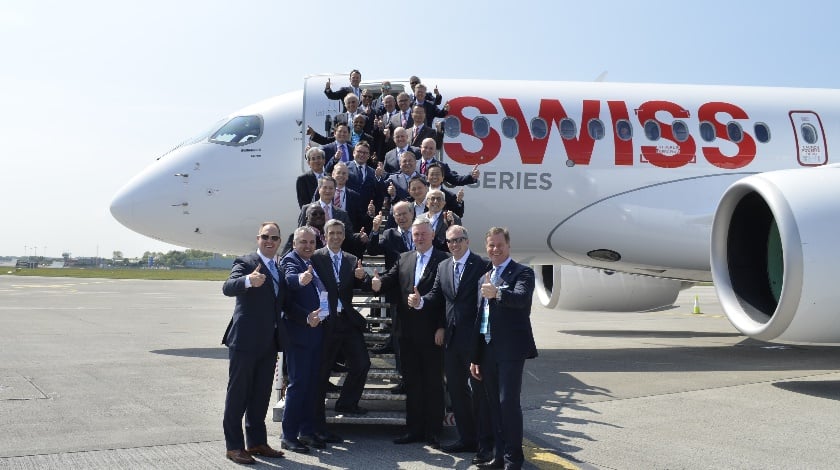 The historic flight of the innovative C Series aircraft, which features state-of-the-art technologies, departed Dublin at the conclusion of the 2016 Annual General Meeting of the International Air Transport Association (IATA) on June 3, 2016.

With the passengers, their luggage and fuel on board, Bombardier confirmed to passengers that its calculations indicated the aircraft could have flown direct from Dublin to Montréal. The one hour and 50 minutes ride from Dublin to Zurich consumed 20 per cent less fuel than competing single-aisle aircraft currently flying that route.

“It was a pleasure to welcome our fellow Star Alliance Chief Executive Board members to Zurich in this special year, having flown on a very special aircraft – the Bombardier C Series – for which SWISS is the launch customer,” said Thomas Klühr, Chief Executive Officer, SWISS.

“We are really looking forward to welcoming the CS100 into our fleet when we take delivery in a few weeks.”

“Along with our friends at Star Alliance we were able to offer their member airlines a unique and exclusive opportunity to fly aboard the CS100 aircraft from Dublin to Zurich.

“As we approach first delivery and entry-into-service with launch operator SWISS, showcasing the CS100 aircraft to Star Alliance members and media provided them with first-hand experience of the C Series aircraft’s flight deck and cabin in operation.

The quiet, steep take-off and climb out to 37,000 feet (11,278 metres) impressed us all and the feedback has been overwhelmingly positive and complimentary – all in anticipation of the aircraft entering commercial service this summer. Our business case for the C Series aircraft is coming to fruition and we are confident that our strategic plan is on track,” added Mr. Cromer.