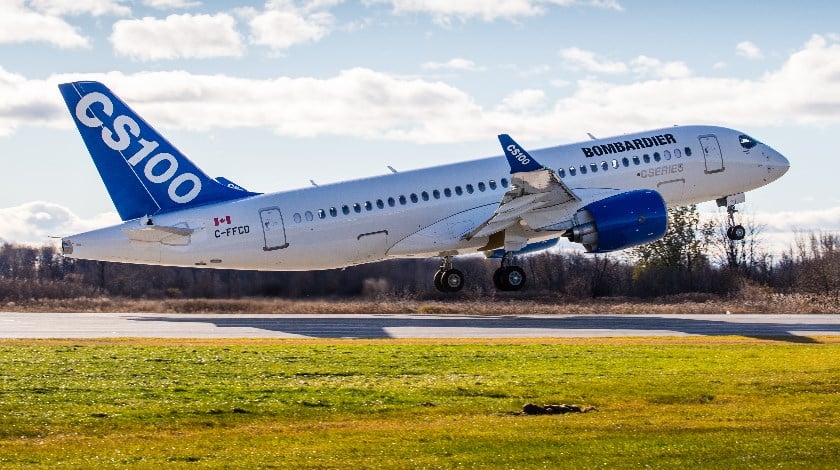 Bombardier’s consolidated revenue for the quarter totaled $4.1 billion, down 5% from $4.3 billion in the year-ago quarter. Bombardier said its revenue performance was mainly a result of production rate adjustments in the company’s aerospace segments “consistent with market demand” combined with modest growth in its transportation (mass transit) segment.

“We continue to make solid progress executing our five-year turnaround plan [through] improving our operating margins, transforming our operations and executing on our growth programs,” Bombardier president and CEO Alain Bellemare said, adding the company expects to meet its full-year guidance of EBIT before special items between $580 million and $630 million.

Bombardier booked firm orders for 12 commercial aircraft in the first quarter—all Q400 turboprops—plus letters of intent (LOIs) for up to 52 Q400s, including an LOI from Indian low-cost carrier (LCC) SpiceJet for up to 50 aircraft and an exercise of options by Philippine Airlines for seven aircraft. There were no new orders for Bombardier’s CSeries aircraft during the quarter.

In a statement, Bombardier said it disagreed with assertions in the petition filed in May by Boeing before the US Department of Commerce (DOC) and the US International Trade Commission regarding the “alleged threat caused by future exports of CSeries family aircraft to the US.” Bombardier said it is responding to the petition proceedings and expects DOC to issue its preliminary determinations on any applicable duties in fall 2017, with final DOC determinations expected during the first half of 2018.

The case stems from Boeing’s claim that Bombardier had offered the CSeries to Atlanta-based Delta Air Lines at an “absurdly low” $19.6 million per aircraft, well below what Boeing described as the aircraft’s production cost of $33.2 million. Delta placed a firm order for 75 CS100 aircraft in April 2016.

“Propelled by massive … illegal government subsidies, Bombardier Inc. has embarked on an aggressive campaign to dump its CSeries aircraft in the United States,” Boeing said in its petition. Bombardier rejected Boeing’s claims, saying the $19.6 million figure “is materially wrong; it is off by millions,” according to a Bombardier spokesperson.

The company delivered 20 commercial aircraft—six CSeries, seven CRJs and seven Q400s—during the quarter, bringing its year-to-date commercial aircraft delivery total to 28. Bombardier said the company is in line with its full-year delivery guidance for approximately 80 to 85 aircraft deliveries, including approximately 30 CSeries deliveries—which is at the low end of Bombardier’s delivery guidance range for the CSeries program. Nonetheless, the company said it is ramping-up production to support delivery of 30 CSeries aircraft by the end of the year, adding “CSeries aircraft deliveries are expected to gradually intensify in the second half of the year.”