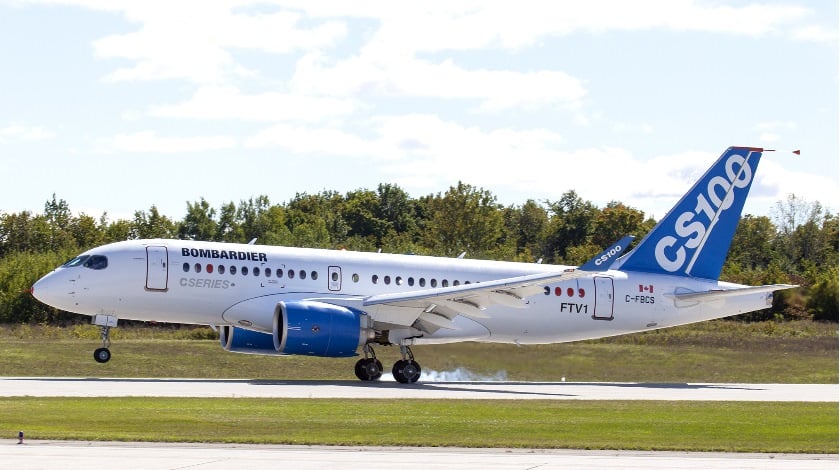 Bombardier made a number of announcements today regarding the first six weeks of operations and the 2016 delivery schedule for its C Series aircraft. The Company confirmed that the two CS100 aircraft in service with SWISS have collectively flown nearly 400 revenue-generating flights, and accumulated almost 600 flight hours.

“We are very pleased with the performance of the C Series during its entry-into-service with our launch customer SWISS,” said Fred Cromer, President, Bombardier Commercial Aircraft. “The aircraft is meeting all expectations and clearly demonstrating that it is the best performing and most efficient aircraft in the 100- to 150-seat class.”

A third CS100 aircraft is scheduled to be delivered to SWISS next month, and the CS300 – the larger C Series variant – is expected to enter service with airBaltic in the fourth quarter. For the full year, the Company has adjusted its C Series delivery forecast from 15 to 7 aircraft as a result of engine delivery delays by its supplier Pratt & Whitney.

“The C Series engine is performing very well in service. We are working very closely with Pratt & Whitney to quickly address this supplier ramp-up issue and to ensure we have a strong supplier base to support our long-term growth objectives,” said Mr. Cromer. “We are very confident in our production ramp-up plan, including our ability to meet our production goal of 90 to 120 aircraft per year by 2020.”

The C Series program continues to meet its program milestones and gain traction in the market. Including significant orders from Air Canada and Delta earlier this year, the Company has more than 300 firm orders and up to 800 orders including options and commitments. With the certification of the CS300 and the CS100’s entry-into-service, the C Series program has transitioned from the development phase into production ramp-up. Last week, Bombardier also announced that it has received the second and last $500 million installment of the Government of Québec’s investment in the C Series aircraft program, further strengthening its liquidity position

The C Series delivery adjustment announced today will result in lower revenues at Bombardier Commercial Aircraft for the year without affecting EBIT materially. On a consolidated basis, 2016 revenues and EBIT guidance are reaffirmed. As a result of the delay, the Company now expects to be close to the lower end of the $16.5 to $17.5 billion revenue guidance range, and free cash flow usage is expected to be in the range of $1.15 to $1.45 billion. EBIT is expected to be at the upper end of the $200 to $400 million range.

The company expects to end the year with a strong liquidity position and remains on track to achieve both its 2018 cash flow neutral goal and its 2020 turn-around plan objectives.