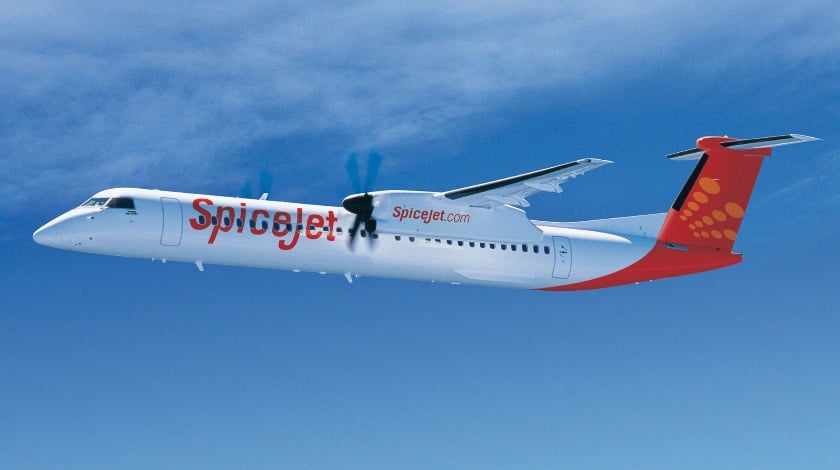 Bombardier Commercial Aircraft today announced that it has concluded a firm purchase agreement with SpiceJet Limited (“SpiceJet”) of Gurgaon, India for up to 50 Q400 turboprop airliners, making it the largest single order ever for the Q400 turboprop aircraft program and bringing total Q400 firm orders to over 600 Q400 aircraft. Upon delivery, the airline will become the first in the world to operate a 90-seat turboprop, pending certification by regulatory authorities.

The purchase agreement includes 25 Q400 turboprops and purchase rights on an additional 25 aircraft. Based on list prices, the order is valued at up to US $ 1.7 billion.

“We are very proud to firm up this agreement with SpiceJet as it is another demonstration of the Q400’s unique versatility. This repeat order will not only increase the Q400 aircraft fleet in the fast-growing regional market in India and in the Asia-Pacific region but will also launch the high-density 90‑passenger model,” said Fred Cromer, President, Bombardier Commercial Aircraft. “This order confirms the airlines’ increased capacity needs on regional routes with high passenger demand and demonstrates the increased profitability potential that this unique turboprop configuration has to offer.”

“I am pleased to confirm SpiceJet’s latest order for up to 50 Bombardier Q400 planes, which has been announced at the Paris Air Show. I am sure this fresh order will help us further enhance connectivity to smaller towns and cities and help realize Prime Minister Narendra Modi’s vision of ensuring that every Indian can fly,” said Ajay Singh, Chairman and Managing Director, SpiceJet. “SpiceJet operates India’s largest regional fleet and has always been a firm believer in the growth story of India’s smaller towns and cities. We have worked hard over the years to put these smaller towns on the country’s aviation map and will strive to keep that momentum going in the times to come.”

“We have been witnessing growth in the number of passengers per departure in the turboprop market, and especially in India. Today, Bombardier offers the largest turboprop aircraft available on the market and SpiceJet will be the first airline to take advantage of the profitable and efficient operations that the 90-passenger high-density Q400 will offer them,” said François Cognard, Vice President, Sales, South-Asia and Australasia.

Since 2010, SpiceJet has taken delivery of 15 new Q400 aircraft. The airline currently operates 20 Q400 aircraft in a 78-seat configuration to domestic and international destinations. This fleet expansion will provide SpiceJet with the ability to grow profitably and leverage the robust demand forecast in the world’s fastest growing regional aviation market.

Bombardier’s Q Series turboprops and CRJ Series regional jets have made significant advances in the Australasia region where approximately 380 aircraft – including more than 240 Q Series turboprops — are in service with or on order by over 45 customers and operators.

Including SpiceJet’s order, Bombardier has recorded firm orders for a total of 610 Q400 aircraft.