Bombardier Wins Orders for Two CS300 and One Q400 Aircraft 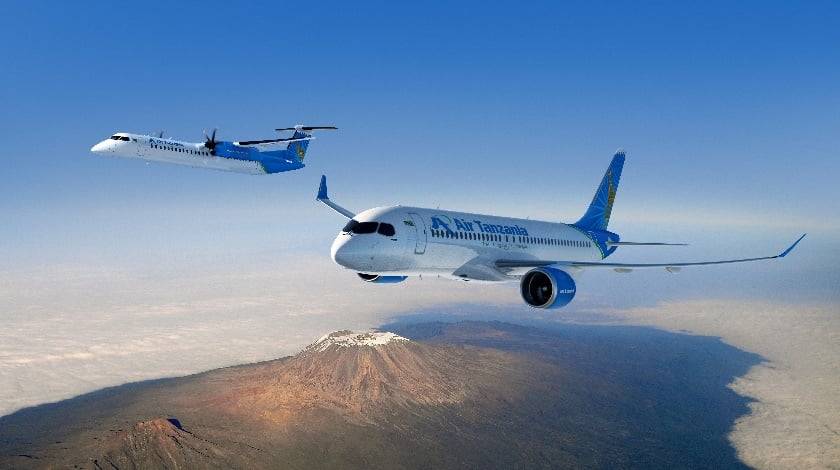 Bombardier Commercial Aircraft announced that the United Republic of Tanzania represented by the Tanzanian Government Flight Agency (TGFA) has signed firm purchase agreements for two CS300 jetliners and one Q400 turboprop aircraft. The aircraft will be leased to and operated by Air Tanzania (The Wings of the Kilimanjaro) based in Dar es Salaam.

Based on the list prices of the CS300 and Q400 aircraft, the combined value of the purchase agreements is approximately $200 million US.

Like the two Q400 turboprop aircraft delivered to the TGFA for lease and operation by Air Tanzania in September 2016, the third announced will have an all-economy, 76-seat interior with two lavatories. The two CS300 airliners will be configured in a dual-class layout, and will be equipped with WiFi internet and in-flight entertainment.

“The domestic market in Tanzania as well as the regional market are becoming more competitive as both business and leisure travel are steadily increasing,” said Dr. Leonard Chamuriho, Permanent Secretary at Tanzania’s Ministry of Works, Communications and Transport. “Therefore it is vital to operate aircraft that offer superb passenger comfort and amenities. Of course, high reliability, operational flexibility, as well as excellent fuel efficiency and economics are also necessary. Both the Q400 and CS300 aircraft more than satisfy these parameters.”

“We are delighted that the Q400 aircraft which entered service with Air Tanzania earlier this year are proving their superior economics and versatility. The CS300 aircraft will allow Air Tanzania to expand both its domestic and regional markets, and it has the range to open new international destinations such as the Middle East and India at the lowest cost. The C Series jet aircraft have the right attributes to develop these markets,” said Jean-Paul Boutibou, Vice President, Sales, Africa and the Middle East, Bombardier Commercial Aircraft.