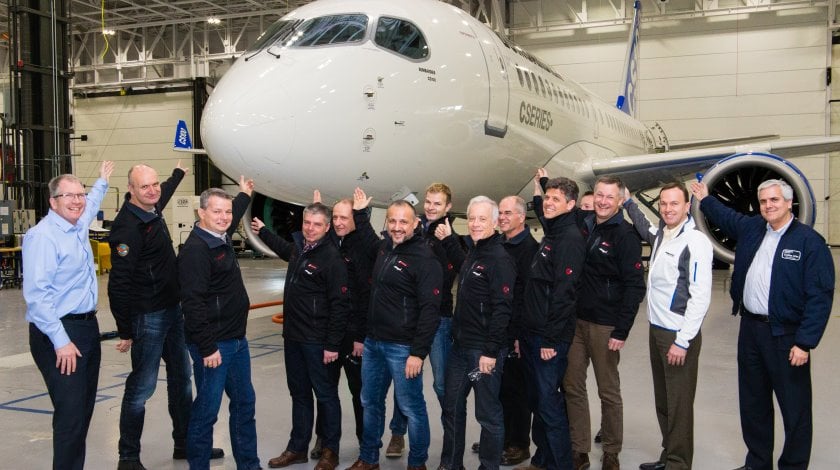 Bombardier Commercial Aircraft announced today that its all-new C Series aircraft program has begun the ramp-up to full production. The final assembly facility is fully equipped and production is progressing according to plan with aircraft in various stages of the build sequence. Additionally, Bombardier also confirmed that the CS100 aircraft that is scheduled to be delivered to first operator SWISS International Air Lines (SWISS) and enter service in Q2 2016 is structurally complete.

Yesterday, SWISS’ flight crews kicked off their CS100 aircraft flight training in Mirabel, Québec where they will undergo intensive training to prepare for the route-proving flights they will operate alongside Bombardier’s flight crew when the CS100 route-proving aircraft flies to Europe in the coming weeks. This follows the completion of the North American route-proving program that included more than 35 cities. During the program, the CS100 aircraft conducted flights using typical airline flight routings and operational procedures.

“It’s truly a spectacular sight to see the C Series final assembly line fully stacked with production aircraft in various stages of assembly. The line itself has been designed for maximum production efficiency and our skilled production teams reached a milestone this month when they rolled out the first structurally complete aircraft that will enter service with SWISS in the next few months,” said Fred Cromer, President, Bombardier Commercial Aircraft. “I also had the pleasure of welcoming the first set of SWISS crews to Mirabel as they start their pilot training in anticipation of the European CS100 aircraft route-proving program. The program will be operated from SWISS’ own base in Zurich, Switzerland – yet another way we are ensuring a flawless entry-into-service (EIS) alongside our first operator.”

“In addition to the C Series aircraft production ramp-up and European route proving, our C Series Program and Engineering teams are working diligently alongside our Customer Services team –transferring employees to various areas for cross-functional training and aircraft familiarization,” said Rob Dewar, Vice President, C Series Aircraft Program, Bombardier Commercial Aircraft. “The timing is perfect as we now ready the European leg of the C Series route-proving program. We are also doing something unique to ensure that SWISS’ crews will be ready at delivery and EIS – SWISS’ flight crews, once trained, will operate the CS100 route-proving aircraft alongside Bombardier’s own flight crews from SWISS’ main base of operations. They will use SWISS’ schedule, crews, maintenance crews and aircraft destinations — all in the coming weeks.”

The C Series family of aircraft, representing the fusion of performance and technology, is a 100 per cent all-new design that offers operators potential savings of between US$ 7.5 to 12 million per aircraft.

By focusing on the 100- to 150-seat market segment, Bombardier has designed the C Series aircraft to deliver unparalleled economic advantage to operators and to open up new opportunities for single-aisle aircraft operations.

All noise performance testing on the CS100 aircraft has been completed and data confirms it is the quietest in-production commercial jet in its class. The aircraft’s noise performance and its outstanding short-field capability make it ideal for varied types of operations. The C Series aircraft’s maximum range has also been confirmed to be up to 3,300 NM (6,112 km), some 350 NM (648 km) more than originally targeted.

The CS100 and CS300 aircraft have over 95 per cent parts commonality, as well as the same type rating. The groundbreaking Pratt & Whitney PurePower® PW1500G engine, combined with advanced aerodynamics, delivers reduced fuel burn, noise and emissions, increasing the aircraft’s environmental and social compatibility.

Bombardier has booked orders and commitments for 603 C Series aircraft, which include firm orders for 243.