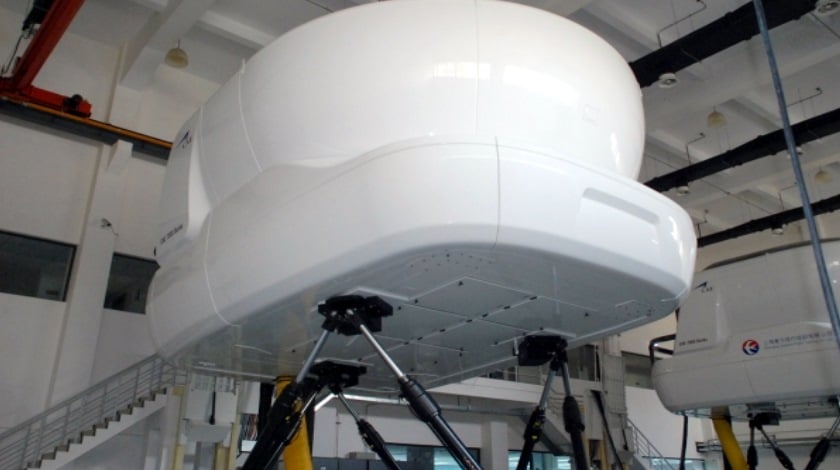 Bombardier Commercial Aircraft and CAE announced today that Transport Canada, the US Federal Aviation Administration (FAA) and the European Aviation Safety Agency (EASA) have awarded Interim Level C qualification on the full-flight simulator (FFS), and qualified the flight training device (FTD) for the all-new CS100 aircraft.
Officials from each of the authorities granted their respective qualifications following final inspection of the simulator and training device located at Bombardier’s training centre in Montréal.
“Our teams have been working diligently to achieve the qualifications for the CS100 aircraft training devices and we are delighted that the three regulatory authorities approved in quick succession – particularly as we ramp up our customer support activities in preparation for first delivery and entry-into-service in Q2 2016,” said Todd Young, Vice President and General Manager, Customer Services, Bombardier Commercial Aircraft. “Additionally, 95 per cent of technical publications are complete and operators are accessing these publications through our new online customer portal. We are steadily increasing our team of Field Service Representatives and technicians to service our C Series aircraft customers.
“We are also maintaining a strong focus on supplier management to ensure the team is ready to support our customers with adequate inventory levels and repair capabilities across our worldwide network,” added Mr. Young.

“Achieving qualification for the world’s first C Series aircraft full-flight simulator marks an important milestone, which highlights the many years of collaborative efforts with our longstanding partner Bombardier,” said Nick Leontidis, CAE’s Group President, Civil Aviation Training Solutions. “We are honoured that Bombardier has selected us to build the first simulator for the C Series program. By qualifying the first C Series simulator, we ensure Bombardier customers receive the highest fidelity training for its C Series aircraft.””This is a great time for the C Series aircraft program – we received the CS100 Type Certification from Transport Canada last week and now we are announcing that we also have approvals on the flight training devices by Transport Canada, the FAA and EASA. This gives us great satisfaction and immense pride in the program and in our people,” said Rob Dewar, Vice President, C Series Aircraft Program, Bombardier Commercial Aircraft. “As we prepare for entry-into-service of the CS100 aircraft with first operator SWISS, crew training is a key component in our path to success.”

The entry-into-service and operation of C Series aircraft will be supported by Bombardier Commercial Aircraft’s worldwide customer services network. The customer services team is currently available 24/7/365 to operators of Bombardier CRJ Series regional jets and Q Series turboprops, and is actively being strengthened to support the C Series family of aircraft.
As announced previously, Bombardier’s Aircraft Health Management System (AHMS) for the C Series aircraft is an integral part of the airliner’s design, ground system and support tools, and will be available to operators at the aircraft’s entry-into-service. By leveraging the large amounts of data recorded and transmitted from C Series aircraft, the AHMS will allow operators to make sound decisions on aircraft performance and maintenance. Pratt & Whitney’s data service system will be the infrastructure unit used to perform data transmissions from the C Series aircraft’s on-board Health Management Unit (HMU) while on the ground, and Bombardier has contracted Tech Mahindra to develop the Aircraft Ground Support System for the AHMS. Tech Mahindra’s cutting-edge Cloud Computing, Sensor, Internet of Things (IOT) and Big Data technologies will be utilized to perform deep analytics of the aircraft’s health status.
Bombardier’s current Customer Services network includes Customer Response Centres located in Montréal and Toronto, Canada, as well as 22 Regional Support Offices and Parts Facilities. Three Bombardier-owned and operated Service Centres in the U.S. provide heavy maintenance, drop-in maintenance, as well as structural repair and overhaul of airframes and components. Some 10 strategically located Authorized Service Facilities provide valued support to keep our customers flying competitively. The network is augmented by regionally-based mobile teams.

The C Series family of aircraft, representing the fusion of performance and technology, is a 100 per cent all-new design that offers operators potential savings of between US$ 7.5 to 12 million per aircraft.
By focusing on the 100- to 150-seat market segment, Bombardier has designed the C Series aircraft to deliver unparalleled economic advantage to operators and to open up new opportunities for single-aisle aircraft operations.
All noise performance testing on the CS100 aircraft has been completed and data confirms it is the quietest in-production commercial jet in its class. The aircraft’s noise performance and its outstanding short-field capability make it ideal for varied types of operations. The C Series aircraft’s maximum range has also been confirmed to be up to 3,300 NM (6,112 km), some 350 NM (648 km) more than originally targeted.
The aircraft is delivering more than a 20 per cent fuel burn advantage compared to in-production aircraft, and a greater than 10 per cent advantage compared to re-engined aircraft. The C Series aircraft will also emit 50 per cent fewer NOX emissions than the CAEP 6* NOX emission standards.
In addition to delivering best-in-class economics with the C Series aircraft, Bombardier has placed considerable emphasis on cabin design to ensure an excellent passenger experience. The C Series aircraft’s larger seats, overhead bins and windows create a widebody feel that offers passengers unparalleled comfort.
The CS100 and CS300 aircraft have over 95 per cent parts commonality, as well as the same type rating. The groundbreaking Pratt & Whitney PurePower® PW1500G engine, combined with advanced aerodynamics, delivers reduced fuel burn, noise and emissions, increasing the aircraft’s environmental and social compatibility.
Bombardier has booked orders and commitments for 603 C Series aircraft, which include firm orders for 243.

CAE is a global leader in the delivery of training for the civil aviation, defence and security, and healthcare markets. We design and integrate the industry’s most comprehensive training solutions, anchored by the knowledge and expertise of our 8,000 employees, our world-leading simulation technologies and a track record of service and technology innovation spanning seven decades. Our global presence is the broadest in the industry, with 160 sites and training locations in 35 countries, including our joint venture operations, and the world’s largest installed base of flight simulators. Each year, we train more than 120,000 civil and defence crewmembers, as well as thousands of healthcare professionals.

Bombardier is the world’s leading manufacturer of both planes and trains. Looking far ahead while delivering today, Bombardier is evolving mobility worldwide by answering the call for more efficient, sustainable and enjoyable transportation everywhere. Our vehicles, services and, most of all, our employees are what make us a global leader in transportation.
Bombardier is headquartered in Montréal, Canada. Our shares are traded on the Toronto Stock Exchange (BBD) and we are listed on the Dow Jones Sustainability North America Index. In the fiscal year ended December 31, 2014, we posted revenues of $20.1 billion.