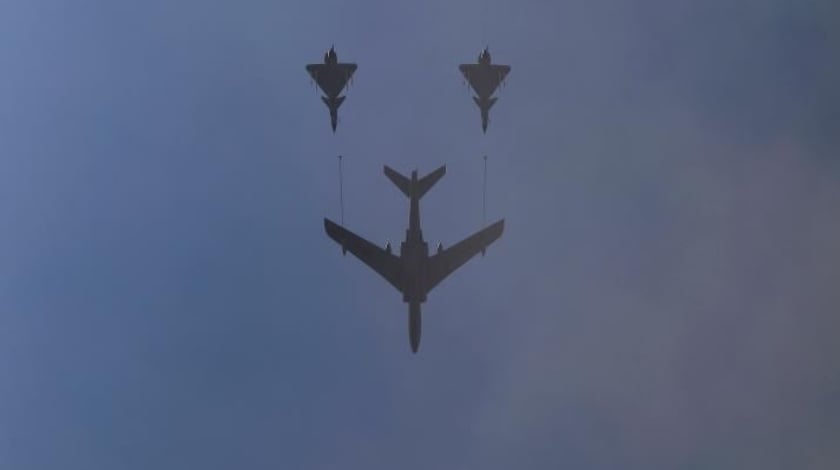 Three Chinese military planes “briefly” flew into an overlapping air defense intensification zone of South Korea and China amid tensions between the two countries over Seoul’s decision to place a missile defense system on its soil, a military source in Seoul said Monday.

The Chinese planes, including a bomber engaging in its own military operations, flew into the airspace near South Korea’s southern island of Jeju on Thursday, without prior notification, but left shortly after the South Korean military issued a warning message and sent fighter jets to escort the intruders out of the area.

The area that the Chinese planes flew over was the western side of Ieodo, a submerged rock located around 150 kilometers southwest of Jeju. It is an area where the air defense identification zones of South Korea and China overlap.

In 2013, China unilaterally expanded its own air defense identification zone to cover a reef and other islands off the southern coast of the Korean Peninsula. South Korea announced an expansion of its own Korean Air Defense Identification Zone to counter the Chinese move.

The new zone included airspace over the reef of Ieodo and the southern islands of Marado and Hongdo.

The latest violation of the zone is seen by some as a “show of force” by China, which has been voicing displeasure with Seoul’s recent decision to place a U.S. missile defense system in South Korea despite its strong opposition.

In July, South Korea and the United States unveiled a plan to install a THAAD battery on the peninsula by end-2017 to counter North Korea’s mounting nuclear and missile threats.

China has strongly objected to the plan on worries that it would undermine its strategic security interests. Seoul has stressed that the missile defense shield poses no threat to neighboring countries because it is designed to counter North Korea’s evolving nuclear and missile threats.