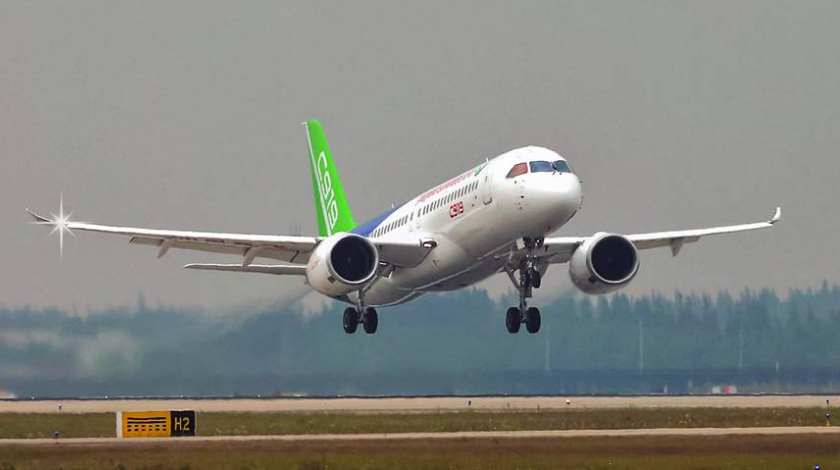 China is further progressing with the development of its own passenger aircraft – COMAC C919. Publicly introduced in 2017 after the completion of its maiden flight, the program is currently running tests on four prototypes which will be joined by two more this year.

Recently, the fourth prototype, 104, has successfully joined the company of three test aircraft. According to COMAC, during the initial flight of 1 hour and 25 minutes, the plane has completed a number of test points and initial control inspections of various aircraft systems.

The third test aircraft, 103, performed its maiden flight in December 2018. Now it took off for the series of further tests. According to AINonline, the plane was airborne for 2 hours 39 minutes before successfully landing at its base.

The first prototype, 101, took off for its first flight in May 2017. Six months later this flight was followed by a long-distance test flight and the aircraft flew again in June 2018 as part of a control-stability test and systems check. The recent tests were carried out together with the second prototype, 102.

In between of flying tests, each prototype is undergoing necessary modifications and checks in order to get on with flying.

Also, the aircraft manufacturer intends to develop three more prototypes to accelerate test flights. Each of the aircraft are at different production stages.

According to COMAC, six aircraft built for testing purposes are expected to collectively go through 729 tests and gather 4,200 flight hours to proceed with the C919 obtaining certification from the Civil Aviation Administration of China (CAAC). Later the aircraft will get certified by the FAA and EASA.

“The year 2019 is key for the C919, and it is hoped that we can further optimize the flight tasks, enhance flight test efficiency, and complete all the tasks safely,” said in a statement Lai Peijun, a flight test engineer with COMAC.

China was the first country to ban Boeing 737 MAX aircraft from its airspace following the fatal Ethiopian Airlines crash. Although the US planemaker is working hard to regain trust and return its troubled 737 MAX back to service as soon as possible, now it might be the right time for COMAC to faster enter the market and take its position.

The C919 is a narrowbody passenger aircraft capable of carrying about 170 passengers at a range of 4,075 to 5,555 km. Thus, a direct competitor of the Boeing 737 program.

According to COMAC, the Chinese company has 815 orders from 28 Chinese and overseas companies, which include domestic aviation companies and financial leasing companies.