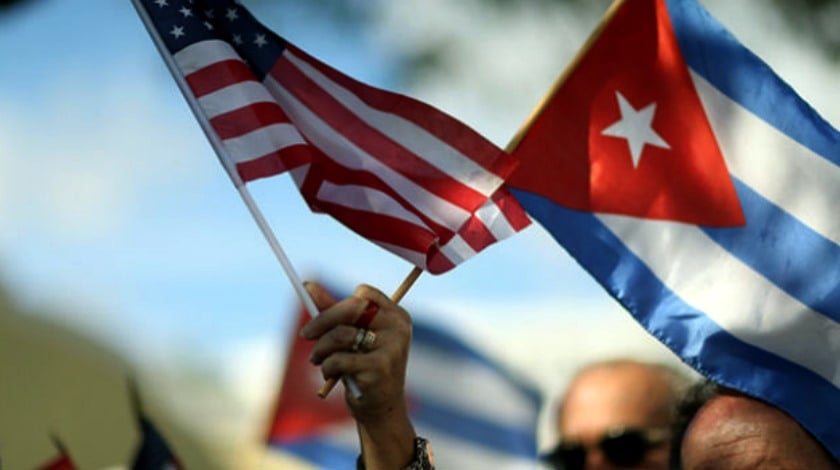 Cuba and the US have reached a bilateral arrangement to establish scheduled air services between the two countries, the US State Department said Thursday. American Airlines, United Airlines and JetBlue Airways were among the first US carriers to say they will seek approval to begin scheduled services as soon as possible.

The agreement, reached late Dec. 16, means that charter operations can continue between the US and Cuba and scheduled services can begin, although no timeline was given. The opening up of scheduled services is expected to be phased in slowly to allow Cuba to build the infrastructure that will be needed to accommodate the extra flights and passengers and to ensure Cubana’s future in the new aviation environment.

US law will still prohibit tourist travel to Cuba by American citizens, but State said that “a stronger civil aviation relationship will facilitate growth in authorized travel between our two countries—a critical component of the President’s policy toward Cuba.”

“Today’s announcement is great news for our customers as it brings us one step closer to connecting the US and Cuba with scheduled air service,” he said. “We look forward to establishing scheduled service to Cuba in 2016, from Miami and other American hubs.”

American said it expects to submit a US-Cuba service proposal to the Department of Transportation and hopes for timely approval of its proposal to enable American to introduce scheduled service as soon as possible in 2016.

United described the agreement as “historic” and said it looked forward to offering service between our global gateways and Cuba “as soon as we have approval to do so.”

“We hope the next dot on our Caribbean route map will be Havana, and possibly even other destinations in Cuba,” JetBlue SVP-airline planning Scott Laurence said. “Cuba is the perfect addition to the JetBlue network.” The airline said it is “eager” to offer scheduled service to Cuba.

The bilateral is a major step forward in the resumption of normal relations between Cuba and the US, a move that began a year ago with an announcement by US President Barack Obama of policy changes and the lifting of some travel restrictions to Cuba by US citizens. Since then, the US has reopened its embassy in Havana, but little else has changed.

Scheduled commercial airline services have been suspended for decades since relations between the two countries broke down during the Cold War era. But that does not mean there have been no US commercial flights to Cuba. Charter flights abound and are a particularly important connector, particularly from Florida where many Cuban Americans reside. In December, American Airlines launched a regular charter from Los Angeles to Havana. US citizen travel to Cuba is said by US officials to be up by some 60% in 2015 over 2014, with more than 100,000 Americans visiting the country between January and September.

There is huge potential for growth Cuban’s aviation and tourism markets, but also many constraints, primarily in ground and airport infrastructure, and in Cuba’s concerns to protect its only major airline, Cubana, which has just 26 aircraft, most of them Russian. Cubana, in its present form, would easily be outweighed by the US carriers that are eager to start service to Cuba, including American, JetBlue and United.

The new bilateral is therefore expected to be phased in slowly. The airline is merging with regional carrier Aero Caribbean, which has a fleet of four ATR 72s and three ATR 42s and which operates domestic flights as well as services to some other Caribbean islands, including the Cayman Islands, Dominican Republic and Haiti. Cubana is restricted to owning aircraft with no more than 10% US-made content; essentially compelling it to use Russian-made Antonov AN-24s, Ilushin IL-96s and Tupolev TU-204s, although it does also lease four A320s from Avion Express, using those aircraft for Canada routes.

Speaking informally during a recent dinner in Havana to mark the 70th anniversary of IATA—which was created in the Cuban capital—Cuba’s head of civil aviation, Mayda Molina Martinez, told ATW that any new air agreement with the US would be phased in slowly and in such a way that would allow Cubana to grow and adapt to the US market.

Cuba’s air traffic management system is well positioned to handle the anticipated increases in commercial airliner movements under a more open aviation agreement. Cuban aviation authorities already liaise with FAA on ATC issues and are recognized as being expert and efficient. In addition to the large number of US charter flights that Cuba’s ATC system handles, the island nation manages well more than 70 over-flights a day.

The pain points will be on the ground, in airport terminal infrastructure and airside. Cuba has 10 international and 15 domestic airports. While the international airports are equipped with long runways, much development work will be necessary if Cuba’s airports, especially Havana, are to manage large increases in aircraft and passenger traffic. New technology will be necessary airside and on the terminal side, there will be a need for far more automation. Self-serve check-in kiosks are non-existent and the checked baggage delivery system from plane to carousel can be hours-long.

“We have offered the government our assistance and to send people here to make a plan for what needs to be done,” IATA DG CEO Tony Tyler told ATW in Havana. “We want to avoid mistakes that others have made, when they build too much too quickly. We can help them draw up a plan so that the right infrastructure is in the right place at the right time.”

IATA announced in November plans to start operating a Billing and Settlement Plan (BSP) banking system in Cuba in 2016, helping to facilitate ticket transactions between airlines and travel agents.

The BSP system would be an important step in the gradual opening up of Cuba’s travel and tourism business as relations between Cuba and the US thaw. IATA’s BSP system is a critical enabler for airlines, facilitating financial transactions through travel agents via a standardized agreement and settlement mechanism.

Cuba has four accredited agents with over 100 branches across the country, but no BSP system.