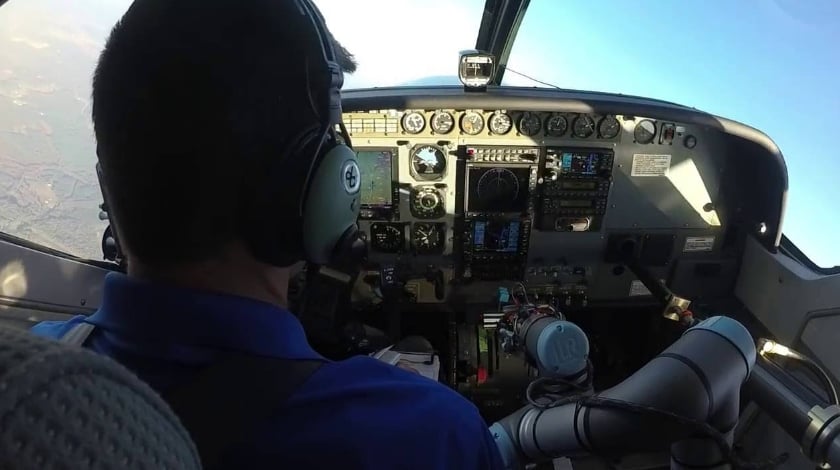 The US military has a well-known shortage of pilots — a problem that is exacerbated by aging legacy aircraft that require at least two people in the cockpit — but the Defense Advanced Research Projects Agency may have a solution on the way.

DARPA is making headway on two different concepts for robotic copilots that would be able to autonomously operate aircraft and offer advice to the human pilot onboard.

In October, the two defense contractors developing those systems, Aurora Flight Sciences and Sikorksy, conducted a series of flight demonstrations ahead of a downselect to a single vendor for the program’s third and final phase.

The impetus behind the Aircrew Labor In-Cockpit Automation System (ALIAS) program is to develop a system that can reduce the number of crew onboard manned platforms, going “from two pilots down to one, and then possibly down to zero,” explained Jean Charles-Lede, program manager of DARPA’s tactical technology program office, during a recent briefing.

The companies were challenged to develop an ALIAS system that can be integrated with at least 80 percent of Defense Department aircraft, including older models that lack the all-digital cockpits and fly-by-wire technology of modern planes and helicopters, said Jessica Duda, Aurora’s ALIAS program manager.

Aurora’s solution uses a robotic arm that is able to physically fly the plane, allowing the human pilot to focus on “high cognitive workload situations” — more difficult problems that require human troubleshooting to solve, Duda said. The machine is designed to be as noninvasive as possible, and basically occupies the same space as a second human pilot normally would.

During an operation, a perception system comprised of machine vision cameras takes in the information a human pilot would normally see on the aircraft’s displays. ALIAS’s software backbone crunches that data and is able to make decisions based on what it is observing.

Aurora wanted to create a tailorable, drop-in system, so “we kind of work within the physical bounds of a human. We have eyes, like a human has eyes, we have the ability to interface with the controls as a human would … and we actually fit within the form factor of one of the seats,” Duda told Defense News.

“We need no proprietary information. That’s what’s so cool about this,” she said. Because the system can visually see and physically touch the instruments in the flight deck, it doesn’t need to delve into to any proprietary avionics information. “We actually don’t even need proprietary aerodynamic models. We’re able to just fully port to any aircraft without any OEM [original equipment manufacturer] cooperation.”

During an Oct 17 flight in Manassas, Virginia, the robotic copilot autonomous flew basic maneuvers on a fixed-wing Cessna Caravan during the first test of the fully integrated system. The company plans to conduct future ALIAS flights aboard a Diamond DA-42 and the Bell UH-1 helicopter before the end of phase two.

Sikorsky’s ALIAS system is more customizable to the customer’s concept of operation and could even eventually replace human pilots entirely, said Igor Cherepinsky, the company’s director of autonomy programs. He compared current ALIAS tests to concepts seen in television shows such as Star Trek.

“If you watch them operate from the spaceship Enterprise, you have one pilot sitting in front of the console, just giving the shuttle directions. … But they don’t really fly it. That’s what our version of ALIAS is for both-fixed wing and rotary-wing aircraft,” he said.

“We’re not talking about removing people from the cockpit, we’re leaving that to the customers. That concept of operations is up to them, whether they want to have two pilots in front, one pilot in front, just operators in the back or nobody onboard at all and just control it remotely.”

Like Aurora, Sikorsky’s ALIAS system employs technology that physically manipulates existing controls on the aircraft, in this case using small actuating elements installed under the instrument panel and floors. Because there are no large robotic arms taking up space in the second cockpit, the Sikorsky system enables operations with a two-person crew if needed.

The human pilot can execute missions, select a flight plan or review other data through a tablet interface. During a flight demo in New York this October, a two-person flight crew flew simulated cargo missions in a fixed-wing Cesna Caravan and the S-76 helicopter, Cherepinsky said.

“You can actually use the same flight crew, with the same mission interface and the same software to operate two very different platforms,” he said. “In fact, they flew back-to-back without any software changes.”

Both Aurora and Sikorsky believe that opportunities abound in the commercial and defense sector for robotic copilots.

“One can imagine, as these vehicles are now smart enough to plan their routes, avoid obstacles, and stick landings, you can pick missions that have that as their core competency,” said Cherepinsky.

That could include cargo, reconnaissance or medical evacuation, and could even expand in future years to one human operator who manages several autonomously-piloted aircraft.

Whether the technology can be proven is no longer the question, he added. Now the largest unknown is when it will become culturally acceptable for aircraft to be operated autonomously.