Delays Expected at Australia’s Airports as Staff Continue To Strike 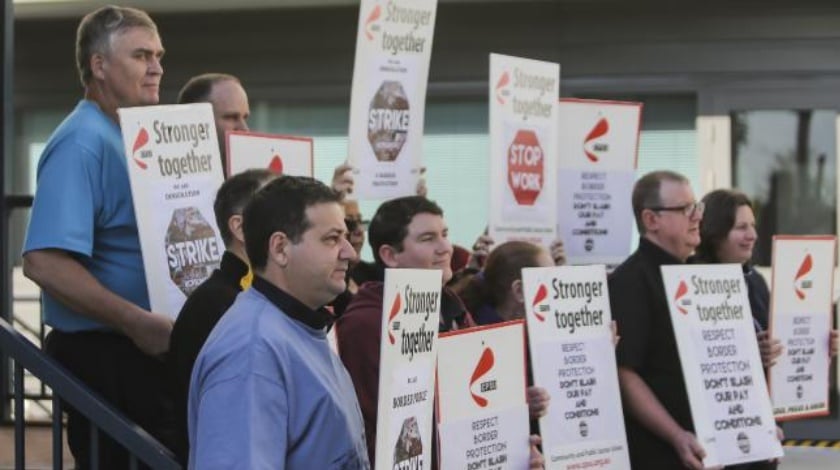 Travellers are being urged to brace for delays at Australia’s major airports today, as strikes by immigration and border protection staff resume.

Community and Public Sector Union members are continuing their long-running fight over pay and conditions with 24-hour strikes at some international airports now in place.

According to the union, the walk offs began at midnight.

The union said thousands of airport workers would take part in the strike, while workers from the Department of Agriculture and Water Resources would hold a stop work meeting.

“This dispute is about to pass the three-year mark, yet Prime Minister Turnbull won’t talk or do anything to resolve the situation,” she said in a statement.

Ms Flood said the workers only wanted to “hang on to their existing pay and working conditions”.

“We’ve got Immigration and Border Force workers who face losing $2900 a year,” she told the Nine Network.

“They haven’t had a pay rise since 2013 and they just want to hang onto what they have got.”

Ms Flood said the union had repeatedly contacted Mr. Turnbull, but “he has continued to sit on his hands doing absolutely nothing to fix this mess”.

“He can avert future strike action, including the prospect of broader industrial action across the Commonwealth public sector, by working with us,” she said.

“The Commonwealth Public Service Union obviously has a claim at the moment which is unreasonable and they are using Border Force staff as a bit of a battering ram for the rest of the public service, because they know that if people are heading overseas, if they are at the airports and the Border Force staff are on strike, then it frustrates people a lot, understandably,” he told 2GB.

“And so the CPSU is using that as really an objective to frustrate people so that they can try and leverage the Government into some of these pay arrangements, which I think are unreasonable across the rest of the public service.”

Earlier this week, Immigration Department assistant commissioner Clive Murray said the Department was attempting to minimise the impact on travellers.

“If you are going overseas or returning to Australia on these dates, we advise you to arrive at the airport early,” he said in a statement.

He said the Department expected to recommence negotiations soon.