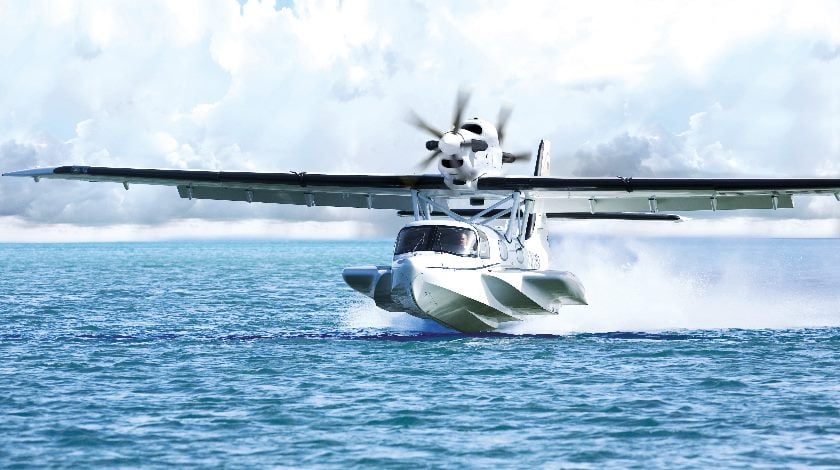 Production has begun on the Seastar, announced Dornier Seawings at this year’s Singapore Airshow. The Seastar is the world’s most advanced amphibious aircraft, engineered to operate on both land and water. This versatility sets it apart from helicopters and conventional seaplanes. The Seastar combines cutting-edge technology with Dornier’s 100 years of flying-boat experience. Dornier Seawings is scheduled to receive the amended Type Certificate according to CS23 (FAR 23) by the European Aviation Safety Agency in the second quarter of 2018 and will deliver the first aircraft to customers later that year.

Dornier Seawings GmbH is an affiliate of the newly established joint venture between the Dornier family, the Wuxi Industrial Development Group and the Wuxi Communications Industry Group Co., Ltd. The joint venture is headquartered in Wuxi, Jiangsu Province, China. The Seastar will be assembled and outfitted in Oberpfaffenhofen, Germany and later in Wuxi, China.

Dr Albert Halder, CEO of Dornier Seawings, comments, “The positive response from customers all over the world makes us confident that the Seastar will be a commercial success. After two years of upgrades and developments, I am pleased to announce to the public that production of the series has begun. We have created a flying boat with unrivalled versatility and performance, low operating costs and best-in-class cabin space.”

The Seastar is the only aircraft in the world that can operate on land and water without compromising performance. Originally developed by Claudius Dornier, using design principles of his father, aviation pioneer Claude Dornier, the aircraft has a maximum cruising speed of 180 KTAS — 40 KTAS faster than its nearest competitor. The Seastar has two reliable Pratt & Whitney turboprop engines with 5-blade MT Propellers, which are mounted above the wing in order to stop water ingestion.

The Seastar’s technology makes it the most economical aircraft in its class. The all-composite, corrosion-free airframe yields significantly lower maintenance costs than other aircraft and offers far better residual value.

The Seastar also offers an unprecedented level of safety. The two engines’ centreline configuration eliminates the possibility of asymmetric thrust in the event of an engine failure. Furthermore, the wing is designed as asingle continuous aerofoil structure with a fail-safe three-spar design. The corrosion-resistant tricycle landing gear was supplied by leading manufacturer Sumitomo Precision Products Canada. The location of the landing gear and fuel tanks in the sponsons on both sides of the fuselage guarantees excellent water-handling and a low centre of gravity. The sponsons also act as working and docking platforms when on water.

The unique all-composite boat hull can perform in rough seas and is highly durable. The Seastar therefore allows for reliable operations even in harsh conditions.

The interior of the Seastar can be tailored to many different operations: VIP, commercial, government or corporate missions. It features a light and spacious cabin that can be equipped with various configurations, including 12-seater commuter, 9-seater corporate and 7-seater VIP. The cabin can also be set up in a “quick-change” configuration for customers that would like to be able to switch easily between different seating options. The cockpit is equipped with Honeywell’s Primus Epic 2.0 all-glass avionic suite and four 10-inch LCD displays with advanced vision, communication, navigation, surveillance and air traffic management systems. It can also be operated by a single-pilot.

Dornier Seawings is committed to providing excellent service to customers and operators including spare parts provisioning, engineering support, maintenance and other services, and training for pilots and technicians.

Conrado Dornier, Chairman of the Board of Dornier Seawings, son of Seastar designer Claudius Dornier and grandson of aircraft pioneer Claude Dornier, remarks, “I am thankful to be able to start a new era for the legendary Dornier flying boats with the Seastar in Singapore. The Seastar is a true “Dornier” of a new generation, with exceptional features, such as the sponsons, tandem propellers and the Dornier boat hull ¬ all made of non-corrosive composite material. In joining forces with the Wuxi Industrial Development Group and Wuxi Communications Industry Group Co., Ltd., we will be able to create the world’s number one centre of excellence in amphibious aviation.”

Dornier Seawings stands for ingenuity, value and tradition with experience deeply embedded in the company’s DNA as engineering experts in aviation. Since 2013, the company has been part of a joint venture that merges the respective know-how, financial backing, and entrepreneurial spirit of each partner.

Frank Liu, Chairman of the Wuxi Industrial Development Group, said, “Our work with the Dornier Family has been mutually beneficial from day one. We are extremely pleased that Wuxi Province will occupy an important position in international aviation and become a new centre for the Chinese aircraft industry. In years to come we will be hiring and training up to 350 highly skilled employees and, with Seastar production in Wuxi, we will be significantly contributing to China’s technological advancement and growth.”

Dornier Seawings GmbH is a joint venture between the Wuxi Industrial Development Group (WXIDG), the Wuxi Communications Industry Group Co., Ltd., and the Dornier family. The joint venture is headquartered in Wuxi, Jiangsu Province, China and the engineering core of the joint venture company is in Oberpfaffenhofen, Germany. The company’s mission is to design, produce, sell and support the world’s most advanced amphibious aircraft starting with the Seastar program. The Seastar is engineered to operate from runway and water surfaces, allowing for entirely new missions that set it apart from helicopters and conventional seaplanes. Production lines are currently set up in Germany (Oberpfaffenhofen) and planned in China (Wuxi), and first deliveries to customers are expected by 2018.