The Company’s operating and financial information is presented, except where otherwise stated, on a consolidated basis in United States dollars (US$) in accordance with IFRS.

Revenues in 1Q17 were US$ 1,026.3 million, representing a decline of 21.6% compared to the prior year period, as a result of lower commercial and executive jet deliveries, as well as the postponement of the Geostationary Defense and Communications Satellite (SGDC) launch, initially scheduled for 1Q17, due to a general strike in French Guiana. Consolidated gross margin declined from 20.0% in 1Q16 to 15.1% in 1Q17, largely due to a less favorable mix and lower deliveries in the Executive Jets segment combined with the postponement of the satellite launch, which caused milestone-related revenues to shift to later this year.

EBIT and EBIT margin in 1Q17 were US$ 23.4 million and 2.3%, respectively, down from US$ 85.7 million in EBIT and 6.5% EBIT margin reported in 1Q16. Adjusted EBIT and EBIT margin, excluding a US$ 7.6 million provision related to the Company’s voluntary dismissal program, were US$ 31.0 million and 3.0%, respectively. The year-over-year decline in revenues and its impact on fixed cost dilution, combined with the aforementioned lower gross margin, were the main drivers of the decline in adjusted EBIT margin in 1Q17 as compared to 1Q16.

Considering all deliveries as well as firm orders obtained during the period, the Company’s total firm order backlog decreased US$ 0.4 billion during 1Q17 to end the quarter at US$ 19.2 billion. 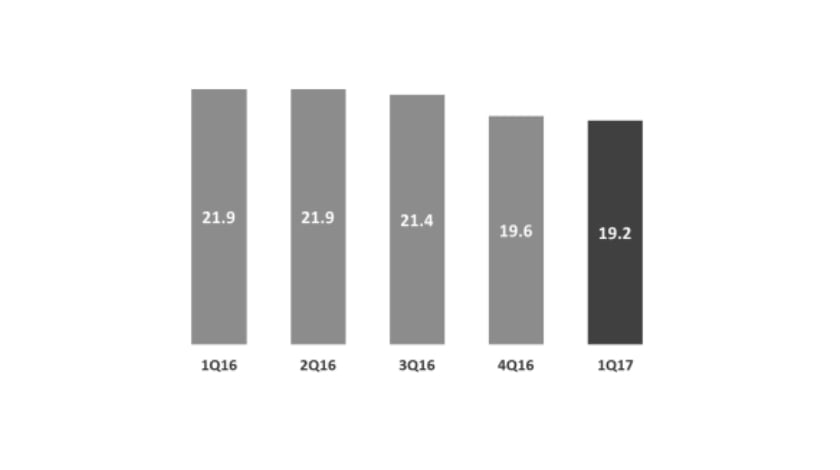