Embraer Rolls Out The Most Efficient Commercial Jet in the World 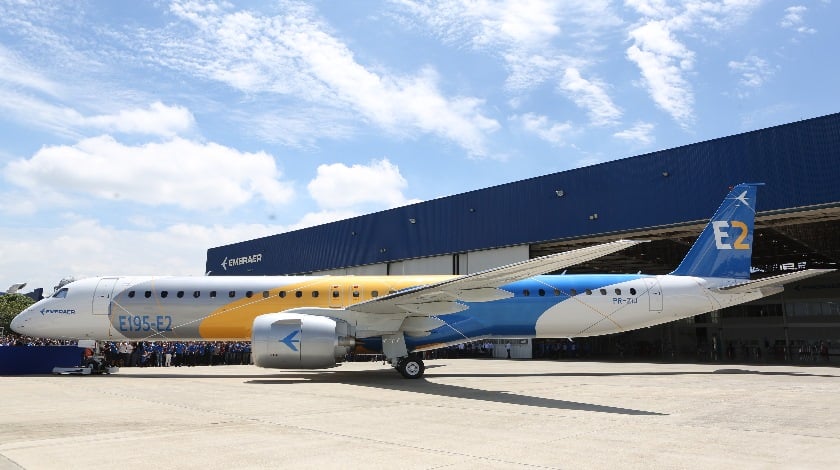 Embraer presented the largest aircraft of the second generation of the E2-Jets family, the most efficient aircraft in the single aisle jet market: the E195-E2. With the first flight scheduled for the coming months, the jet is expected to enter into service in the first half of 2019.

“The E195-E2 has the potential to significantly change the fleet profile of airlines around the world. With a 20% lower cost per trip and a cost per seat similar to larger aircraft, the E195-E2 becomes the ideal aircraft for regional business growth as well as low-cost business plans and complementing existing mainline fleets” said John Slattery, President & CEO, Embraer Commercial Aviation.

The E195-E2 has three additional rows of seats, when compared to the current generation E195, and it can be configured with 120 seats in two classes of service, or up to 146 in a single class. The aircraft also has a significant increase in range of 450 nautical miles, which allows trips of up to 2,450 nautical miles.

The aircraft has a dedicated wing, with the highest aspect ratio among single-aisle jets, increasing fuel efficiency.

In addition to a more balanced specification, Embraer applied over 17 million hours of flight experience on today’s E-Jet fleet of over 1,300 units to come up with the optimal E2 design. For example, being designed with an intelligent combination of materials, the E195-E2 can carry 10% more passengers than a direct competitor and still have the same weight.

“We introduced in the proven E-Jets platform all new technologies that would add value to customers. One example is the fourth generation of fly-by-wire, which allowed a 20% reduction of the empennage area, minimizing drag and weight,” explained Luís Carlos Affonso, COO, Embraer Commercial Aviation.

“The airplane will save up to 24% in fuel and 20% in maintenance costs per seat, when compared to the current E195. A portion of these savings will be achieved with the new engine technology, but the greatest competitive advantage of the E195-E2 lies in the optimization of its structure and of its various systems.”

Embraer will use two aircraft for the E195-E2 certification campaign. The first prototype will be used for the aerodynamic and performance tests.

The second prototype, which will also make its inaugural flight by the end of this year, will be used for the validation of maintenance tasks and of the interior.

Since its launch, the E2 program has reached 690 commitments, 275 of which are firm orders and 415 of which are options and purchase rights, from both airline customers and leasing companies.

Currently, the E-Jets are operating with about 70 customers in 50 countries, being the global leader in the segment of aircraft with up to 130 seats, with over 50% market share.

With an investment of USD 1.7 billion, the E2 program was launched in June 2013 and reinforces Embraer’s commitment to continuously invest in its commercial aviation products as well as maintain market leadership in the segment of 70 to 130 seats.