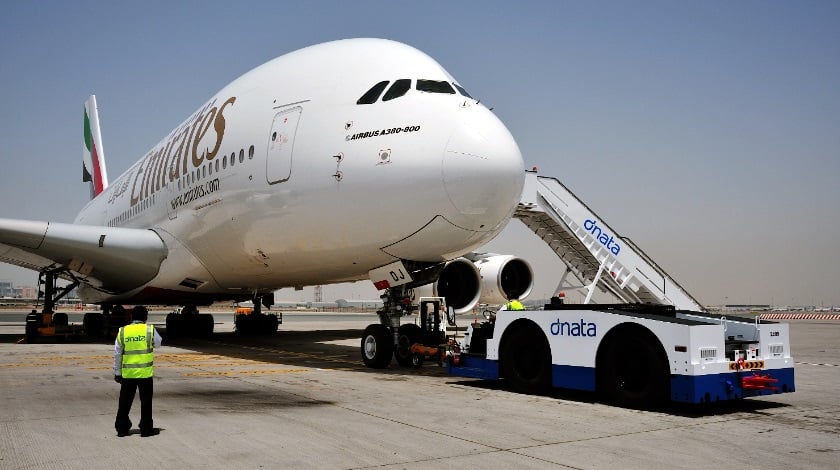 The Emirates Group announced its half-year results for 2016-17. The Group held steady on revenue, but profit was hit by the double impact of a strong US dollar and challenging operating environment for the airline and travel business.

Following one of its best ever half-year profit performances last year, the Group for 2016-17 reported a half-year net profit of AED 1.3 billion (US$ 364 million), down 64%. The Group’s cash position on 30th September 2016 was at AED 14.9 billion (US$ 4.1 billion), compared to AED 23.5 billion (US$ 6.4 billion) as at 31st March 2016. This is due to ongoing investments mainly into new aircraft, airline related infrastructure projects, business acquisitions, and the repayments of bonds totalling AED 4.1 billion (US$ 1.1 billion), loans and lease liabilities.

“Our performance for the first half of the 2016-17 financial year continues to be impacted by the strong US dollar against other major currencies. Increased competition, as well as the sustained economic and political uncertainty in many parts of the world has added downward pressure on prices as well as dampened travel demand,” said His Highness (HH) Sheikh Ahmed bin Saeed Al Maktoum, Chairman and Chief Executive, Emirates Airline and Group.

He added: “The bleak global economic outlook appears to be the new norm, with no immediate resolution in sight. Against this backdrop, the Group has remained profitable and our solid business foundations continue to stand us in good stead. In the first six months of this year, both Emirates and dnata continued to grow in capability and capacity. Our past investments in product and services are now paying off, enabling us to retain valued clients and attract new customers – reflected in the airline’s passenger growth of 2.3 million. We continue to make strategic investments, because we know we have to work even harder for every customer, and make every dollar spent go even further through innovation and driving efficiency across our business.”

In the past six months, the Group continued to develop and expand its employee base, increasing its overall staff count to over 103,000, a 9% increase compared with 31 March 2016. This was mainly due to recent acquisitions in dnata businesses, and also required support for Emirates’ growing fleet.

Emirates continues to invest in the most advanced wide-body aircraft to improve overall efficiency and provide better customer experience. During the first six months of the financial year, Emirates received 16 wide-body aircraft – 8 Airbus A380s, and 8 Boeing 777s, with 20 more new aircraft scheduled to be delivered before the end of the financial year. It also retired 19 older aircraft from its fleet with further 8 to be returned by 31 March 2017.

Operating the world’s largest fleet of A380s and the largest fleet of Boeing 777s, Emirates continues to provide ever better connections for its customers across the globe with just one stop in Dubai.

Emirates carried 28.0 million passengers between 1 April and 30 September 2016, up 9% from the same period last year. The volume of cargo uplifted remained stable at 1.3 million tonnes, a solid performance in a challenging air freight market.

In the first half of the 2016-17 financial year, Emirates net profit is AED 786 million (US$ 214 million), down 75%, following one of the airline’s best half-year performances during the same period last year.

Emirates revenue, including other operating income, of AED 41.9 billion (US$ 11.4 billion) was slightly down by 1% compared with AED 42.3 billion (US$ 11.5 billion) recorded last year. This is due to the unfavourable currency environment – where the US dollar continued to strengthen against most other major currencies; and increased competition resulting in lower average fares. The airline was also impacted by currency devaluation and hard currency shortage in some African countries, as well as dampened travel demand due to the ongoing economic malaise and looming security concerns across major markets in its network.

Emirates operating costs grew by 5% against the overall capacity increase of 9%. On average, fuel costs were 10% lower compared to the same period last year. However, fuel remained the largest component of the airline’s cost, accounting for 24% of operating costs compared with 28% in the first six months of last year.

dnata continued to strengthen its global businesses which now span 83 countries. In the first half of 2016-17, dnata’s international operations accounted for over 67% of its total revenue.

dnata’s revenue, including other operating income, is AED 6.0 billion (US$ 1.6 billion), a robust 14% increase compared to AED 5.2 billion (US$ 1.4 billion) last year. This solid performance was underpinned by the consolidation of dnata’s recent acquisitions in its ground handling businesses in Europe and Americas. Overall profit for dnata was down slightly by 1% to AED 549 million (US$ 150 million), mainly due to the impact of the strong US dollar on currency repatriation from its international businesses, and also due to start-up investment costs in some of its new acquisitions.

dnata’s airport operations remained the largest contributor to revenue with AED 3.1 billion (US$ 843 million), a 31% increase compared to the same period last year.

Across its operations, the number of aircraft handled by dnata increased significantly by 75% to 297,721, and it handled 1.2 million tonnes of cargo, up 28%, reflecting the new businesses acquired, as well as an increase in traffic at Dubai International airport over the same period last year.

dnata’s travel division contributed AED 1.5 billion (US$ 404 million) to revenue, down 13% from the same period last year. The division’s underlying net sales decreased by 14% to AED 5.3 billion (US$ 1.4 billion), illustrating the impact of economic uncertainty and increased price competition in the travel and tourism industry.

dnata’s flight catering operation, contributed AED 1 billion (US$ 286 million) to its total revenue, up 3%. The number of meals uplifted was at 34.2 million meals for the first half of the financial year, up 5% compared to last year’s figure of 32.7 million.