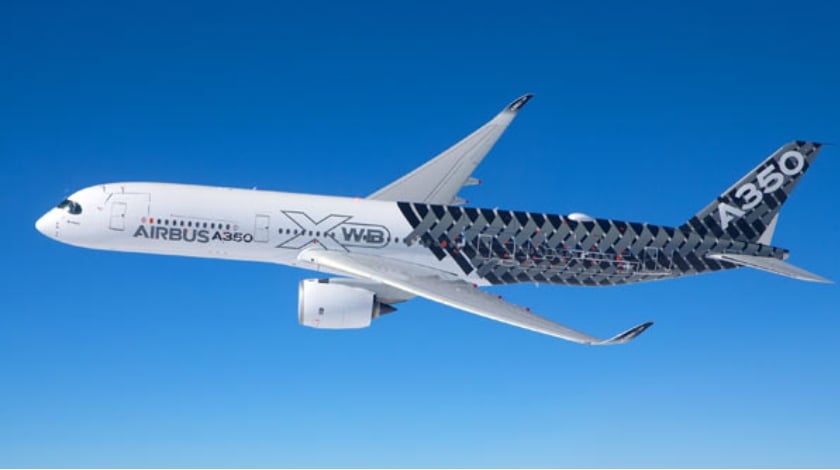 The US Federal Aviation Administration (FAA) has approved the Airbus A350-900 for ETOPS* (Extended-range Twin engine aircraft Operations) ‘beyond 180 minutes’ diversion time.

This approval means that when the first FAA-affiliated operators start to take delivery of their A350s in 2017 they will be able to serve new direct non-limiting routings, compared with a standard 180 minute ETOPS diversion time. It also means that now the A350 XWB is approved by both EASA and the FAA for beyond 180 minutes ETOPS.

This FAA approval, which includes ‘ETOPS 180min’ in the basic specification, also includes provisions for up to ‘ETOPS 300min’ – corresponding to a maximum diversion distance of 2,000 nautical miles (nm) at one-engine-inoperative speed under standard atmospheric conditions. Later this year, once the type accumulates additional in-service experience, it will be granted a further provision for ‘ETOPS 370min’ from the FAA, which will extend the maximum diversion distance up to 2,500nm.

The ETOPS 300min option will, in particular, facilitate more efficient transoceanic routes across the North and Mid-Pacific – such as from South-East Asia to US, and Australasia to the US. Meanwhile, operators flying on existing routes (currently flown with up to 180 minute diversion time) will be able to traverse straighter more fuel efficient flight paths with lower CO2 emissions, while also allowing access to more en-route diversion airports if needed.

The granting by the FAA of this ETOPS capability prior to the A350’s delivery to US-based operators is a testimony to the FAA’s confidence in the aircraft maturity and in US operators who will soon operate the A350 XWB (including: American Airlines, Delta Air Lines and United Airlines) – as well as the type’s demonstrated performance with the five current operators since its entry into service in 2015.

The A350 XWB is Airbus’ all-new mid-size long range product line and a member of Airbus’ leading Widebody family. The type sets new standards in terms of passenger experience, operational efficiency and cost-effectiveness. Around 70 percent of A350 flight hours will be ETOPS. At the end of March 2016, the A350 XWB had won 777 orders from 41 customers worldwide.