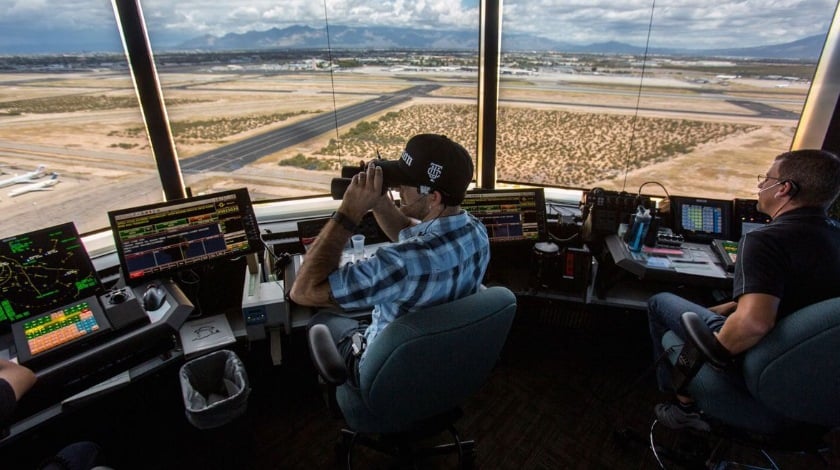 The new tower is 252 feet tall – about double the height of the old tower, which served the airport for 58 years. It provides air traffic controllers with better airfield views and makes it easier for them to determine the positions of aircraft on the ground and in the skies around the airport.

The project came in under budget and ahead of schedule.

“This new tower supports President Obama’s call to invest in a transportation system that will help our economy grow and meet the needs of the Tucson community today and into the future,” said U.S. Transportation Secretary Anthony Foxx. “Safety is our highest priority and the tower will enhance both safety and efficiency for everyone traveling through this airport.”

“With this new tower, Tucson International Airport takes a major step forward in providing the infrastructure needed to secure and grow economic development opportunities associated with the airfield,” said Bonnie Allin, president and CEO of the Tucson Airport Authority. “The tower is also an integral part of the commitment by both the FAA and the TAA to maintain the latest safety enhancements at the airport.”

The new tower sits atop a 13,000 square-foot base building that houses computer equipment, administrative offices, and a backup power system that is designed to automatically activate in case of a commercial power outage.
Numerous environmental features minimize the facility’s energy and water uses.

A 1,600-panel solar farm adjacent to the base building is expected to generate enough power to support all of the facility’s electrical needs for several hours a day on sunny days. At other times, the power it produces will supplement the facility’s commercial power supply.

The facility also uses the solar farm to produce ice, which is stored in large containers and is used at night to cool the building when the solar panels are not producing electricity.

Other environmental benefits include a light-colored roof that reflects the sun’s heat away from the building, insulated windows that reduce the amount of energy needed to keep the controller work area cool, motion detectors for the low-energy, indoor lights, and native desert plants that do not need watering.

The total project cost, including computer equipment, electronics, fire suppression systems, and heating and air conditioning, was about $40 million.
Tucson had approximately 143,000 aircraft operations in 2015. It is served by six airlines and is home to the largest F-16 Air National Guard Base in the U.S.