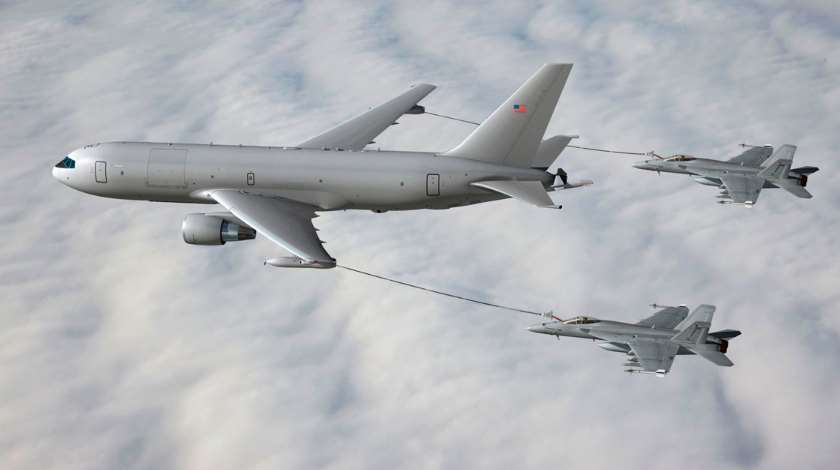 Boeing officials are shifting their attention to a second round of fuel dock testing with the first KC-46 aerial refueler following successful initial airworthiness certification for the aircraft outfitted with its wing-mounted pods and centerline refueling boom.

The team completed initial airworthiness testing for the first KC-46, also known as EMD-2, in the aircraft’s 20th flight Nov. 12, according to Boeing spokeswoman Caroline Hutcheson. The flight lasted 6 hr., she said.

This initial airworthiness testing is one of two major milestones before the program can shift to actually offloading fuel to receivers. The Air Force hopes to begin its aerial refueling demonstration work in late December or early January, said Air Force Brig. Gen. Duke Richardson, the program executive officer for tankers, during a September briefing at the annual Air Force Association symposium outside Washington.

The second major milestone is to execute the forthcoming testing in the fuel dock. This is expected to include trials to validate controls of the fuel system, which shuttles gas throughout the tanker and to receivers.

Richardson said he hoped that EMD-2 would achieve a high sortie rate like its predecessor, EMD-1 (the first 767-2C baseline configuration that includes plumbing and wiring for the tanker but not the boom and pods). EMD-2 took to the skies Sept. 25. The centerline boom is designed to offload 1,200 gal. per minute to satisfy the requirement for topping off the massive C-5 airlifter. The hose-and-drogue system, designed by Cobham, is expected to offload at 400 gal. per minute.

Boeing won the KC-46 contract in February 2011 over a bitter duel with Airbus, which was pitching its A330-based tanker. The government is required to pay $4.9 billion for the development program based on its fixed-price contract with Boeing. The company, however, has been forced to absorb about $1.2 billion in charges to keep the project on schedule after wiring and fuel system problems.