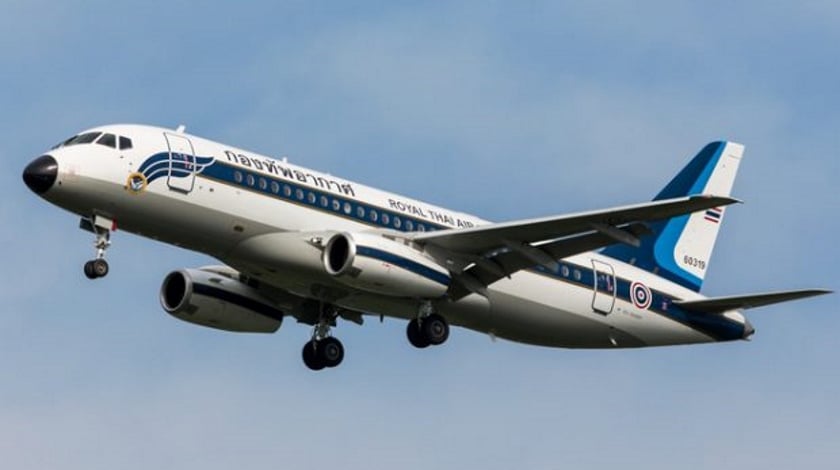 Also known as SBJ (Sukhoi Business Jet), the latest delivery is the third aircraft of the type to join the Royal Thai Air Force fleet. The SSJ100s have been operated as VIP transporters by Thailand since July 2016, following SCAC’s successful competitive tender in 2014.

The aircraft are operated domestically and internationally on behalf of the country’s leaders, including top officials, members of the Thai royal family and the high command of the country’s armed forces.

The two original Thai SBJ interiors featured three cabin layouts – a four-passenger VIP zone, a six-passenger business-class zone and a standard area with a seating capacity of up to 50 passengers. The newly delivered aircraft (MSN 95132) is reportedly configured differently. It will seat 73 passengers, with the cabin divided into two zones, with one believed to be a combination of VIP and business class seats.

SCAC says that since 2016 when the Royal Thai Air Force became the first foreign customer for the business-version of the SSJ100, a number of other customers have followed suit.

Among the customers were Russia’s business aviation operator RusJet; the President of the Russian Federation’s special-purpose Rossiya flight detachment; the EMERCOM flight detachment; and Kazakhstan’s Kazakhmys metal Corp (operated by Comlux KZ), bringing to 10 the number of SBJs currently in operation worldwide.

SCAC says that work is in progress to further enhance the Sukhoi Business Jet by implementing specific new technical features requested by customers, such as integral air-stairs, satellite communications, multimedia entertainment systems and other options. There is also an aim to increase the aircraft’s nonstop flight capability to more than 7,000 km.