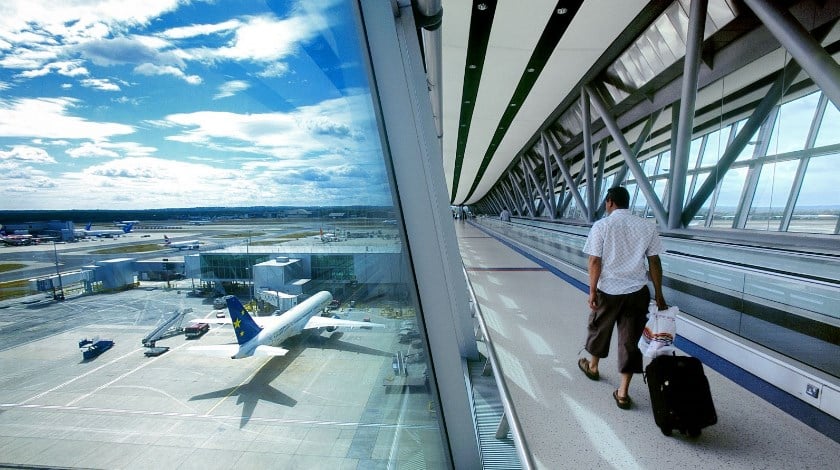 Capacity grew 6.1% and load factor climbed by half a percentage point to 80.4%, which was a record for the month. March demand growth represented a moderate slowdown relative to performance in February after adjusting for the distortion in the year-to-year comparisons owing to the extra day in February 2016. The imposition of the ban on large electronics in the cabin on certain routes to the US and UK occurred too late in March to have an effect on traffic figures.

“Strong traffic demand continued throughout the first quarter, supported by a combination of lower fares and a broad-based upturn in global economic conditions. The price of air travel has fallen by around 10% in real terms over the past year and that has contributed to record load factors. We will have to wait another month to see the impact of the laptop ban on demand,” said Alexandre de Juniac, IATA’s Director General and CEO. 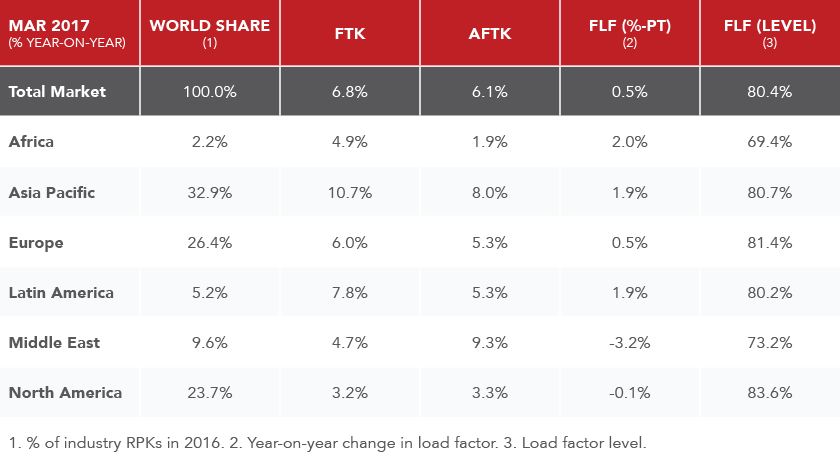 March international passenger demand rose 6.4% compared to March 2016, which was a slight deceleration compared to February, after adjusting for the leap year distortion in February. Airlines in all regions recorded growth. Total capacity climbed 6.1%, and load factor improved 0.2 percentage points to 78.8%.

European carriers saw March traffic climb 5.7% over March 2016. The strong upward trend in part is supported by momentum in the region’s economy. However, wide variation in performance exists among market segments. Demand across the Atlantic has grown only modestly, while RPKs flown on routes to and from Asia and the Middle East are up by around 7-9%. March capacity rose 4.7% and load factor edged up 0.8 percentage points to 82.2%, highest among regions.

Asia-Pacific airlines’ traffic jumped 9.1% in March, compared to the year-ago period. Capacity increased 7.4%, and load factor rose 1.2 percentage points to 78.7%. Growth within the Asia region is solid while traffic on the Asia-Europe route has continued to recover strongly from terrorism-related disruption in early-2016. Demand has risen at an annualized rate of 22% since November.

Middle East carriers’ traffic growth slowed to 4.9% in March compared to a year ago, which was a considerable slowing from January and February year-over-year demand growth. This is related more to developments seen last year, while any impacts from the laptop ban will be visible from April results onward. Overall, however, the region has seen the fastest year-on-year growth in international RPKs so far this year, with robust growth on routes to and from Asia and Europe. Capacity increased 9.4%, and load factor dropped 3.1 percentage points to 73.1%.

North American posted a 2.7% traffic rise in March compared to the year-ago period. Capacity climbed 3.7% and load factor slipped 0.7 percentage points to 79.8%. Passenger traffic has trended sideways in seasonally-adjusted terms since July 2016, alongside a similar trend in capacity.

Latin American airlines had a 9.7% increase in March traffic, which was the strongest among the regions. This was just the second time in 63 months that Latin American airlines led the industry. Strong demand is being supported by robust international demand within South America. By contrast, passenger traffic on the larger North-South America route is nearly 5% below its mid-2015 peak. March capacity climbed 6.4% compared to a year ago, and load factor surged 2.4 percentage points to 80.7%.

African airlines continued to enjoy good demand, with traffic up 6.0% compared to March 2016. Capacity rose 2.4%, and load factor strengthened 2.3 percentage points to 68.2%. Notwithstanding fragility in the region’s biggest economies (Nigeria and South Africa), traffic growth has strengthened in recent months with RPKs growing at an annualized pace of nearly 10% since mid-2016. This pick-up reflects a combination of faster growth on the key market to and from Europe, and also between Africa and the Middle East.

“The first quarter results are strong. But the last weeks have been challenging to the passenger business. The laptop ban—implemented with next to no notice, no dialogue and no coordination, is testing public confidence in how governments and industry work together to keep flying secure. So, even as rumors persist that the ban will be expanded to other airports and regions, we are calling on governments to work with the industry to find alternatives—to keep flying secure without such great inconvenience to our passengers,” said de Juniac.

Concurrently, the recent incident at United Airlines has created calls for more heavy-handed government oversight. “Everyone, including United, agrees there is no justification for what happened to passenger Dr. David Dao. United Airlines CEO Oscar Munoz has apologized repeatedly and is taking steps to ensure there is never a repeat.”

“The video was so shocking that it would be easy for lawmakers and regulators to get caught up in this groundswell of outrage and take steps to limit overselling of flights. However, the management of overbooking has actually worked well for decades. It ensures that scarce capacity is efficiently utilized; we see that in today’s record load factors. Overbooking helps airlines avoid empty seats, and that helps to keep costs—and fares—low. Governments have acknowledged that this ultimately benefits consumers. And if industry-level change is discussed, let’s make sure that there is a transparent fact-based dialogue between industry and regulators. We must be careful to not risk undoing the many benefits unleashed by the competitive forces of deregulation,” said de Juniac.