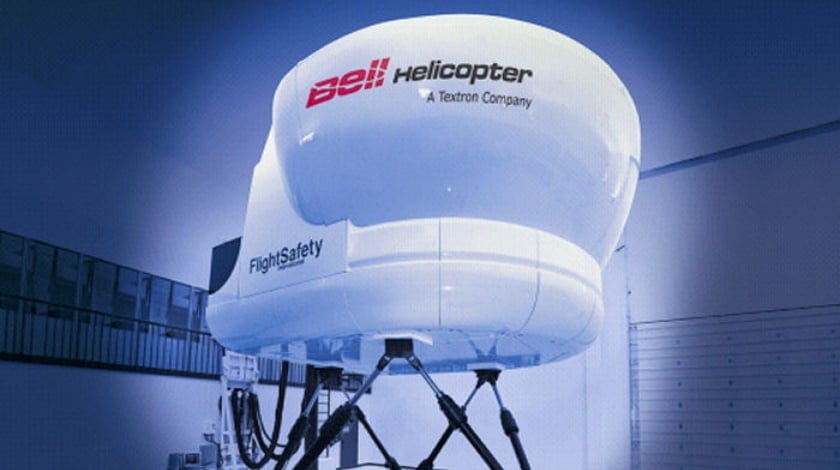 The simulator was recently qualified to Level D by the United States Federal Aviation Administration. It is located at FlightSafety’s Learning Center in Dallas, Texas.

“We are pleased to further enhance and expand our Bell Helicopter training programs in Dallas,” said David Davenport, executive vice president. “FlightSafety’s new interchangeable simulator will be used to provide training for Bell 212 and Bell 412EP helicopters. The recent FAA Level D qualification of this simulator demonstrates our ability to design and manufacture advanced technology training equipment that meets the highest standards.”

The simulator features FlightSafety’s new VITAL 1100 visual system and CrewView glass mirror display with 220 x 60 degree field of view. The computational performance of VITAL 1100 significantly enhances training by providing high definition mission-specific imagery with unprecedented fidelity and a substantial improvement in visual acuity.
The CrewView glass mirror increases visual clarity and brightness while eliminating image degradation and distortion in the critical boundary areas inherent in many traditional display systems.
When configured for the Bell 212, the simulator will offer the Garmin GPS500 avionics. The Honeywell EDZ-705 EFIS System and Honeywell SPZ-7600 3-axis autopilot with four-axis autopilot change-out will be used for Bell 412EP training.
It currently incorporates BLR Aerospace FastFin aero-data for the Bell 412EP. The Bell 212 aero-data will be upgraded next year to include the FastFin functionality as well as the simulated SAS and Bell three-axis autopilot. The simulator has been qualified NVG compatible for both the Bell 212 and Bell 412EP.
FlightSafety has provided the highest quality training to Bell Helicopter operators around the world since 1977. Training for the Bell 212, Bell 412, Bell 412EP and Bell 430 is offered in Dallas, Texas.  FlightSafety’s Learning Center in Lafayette, La. provides training for the Bell 407 and Bell 206.
FlightSafety International is the world’s premier professional aviation training company and supplier of flight simulators, visual systems and displays to commercial, government and military organizations.
The company provides more than a million hours of training each year to pilots, technicians and other aviation professionals from 167 countries and independent territories. FlightSafety operates the world’s largest fleet of advanced full flight simulators at Learning Centers and training locations in the United States, Australia, Brazil, Canada, China, France, Japan, the Netherlands, Norway, South Africa, and the United Kingdom.