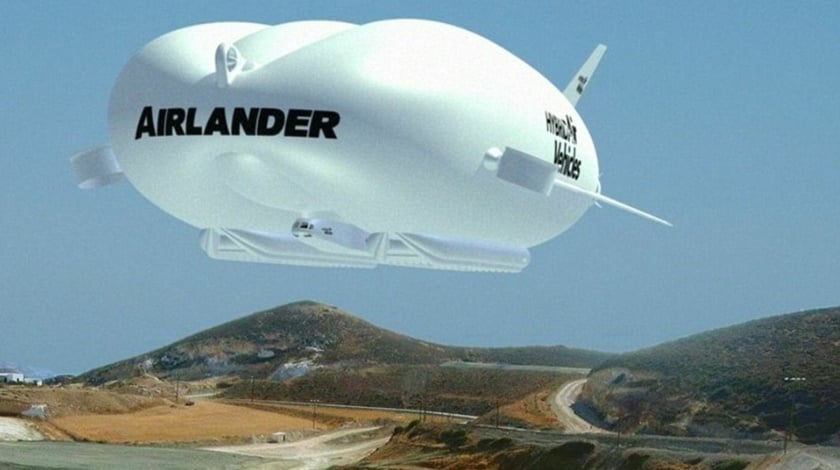 The Airlander 10, known in Britain as “the Flying Bum” because of its unique structure, has slowly edged its way out of a hangar in central England ahead of its debut flight as a civilian aircraft.

Purchased by Britain-based aviation company Hybrid Air Vehicles in 2013, the 92m helium-filled airship was originally developed for the United States Army as a spy aircraft to hover over war zones for weeks using only a fraction of the fuel needed by conventional aircraft.

Hybrid Air hopes to attract customers and corner the market in areas ranging from humanitarian aid delivery to cargo shipments in hard-to-reach places.

The airship is a hybrid of a blimp, which maintains it shape from internal gas pressure, and a Zeppelin, which has a rigid airframe.

The Hybrid Aircraft can carry 80 tonnes of cargo and cruise between 20 knots and 80 knots at an altitude of 6,060m, according to the company.

The Airlander can take off and land vertically and can operate from open fields, deserts, ice or water, meaning it can operate where most conventional airplanes cannot.

Airships have a history stretching back to the 19th century, although their use was curtailed by competition from airplanes in the 20th century and high-profile accidents such as the Hindenburg disaster in 1937.

Hybrid Air is a privately held company funded so far by £17.5 million (S$30.6 million) raised from 1,000 shareholders. It has benefited from US investment, and British and European Union grants.

A series of final ground tests is planned for the weeks ahead of the flight. If all goes well, the company hopes to be building 12 more airships by 2018.