Francesco Mercorelli: Every Flight is a Mission 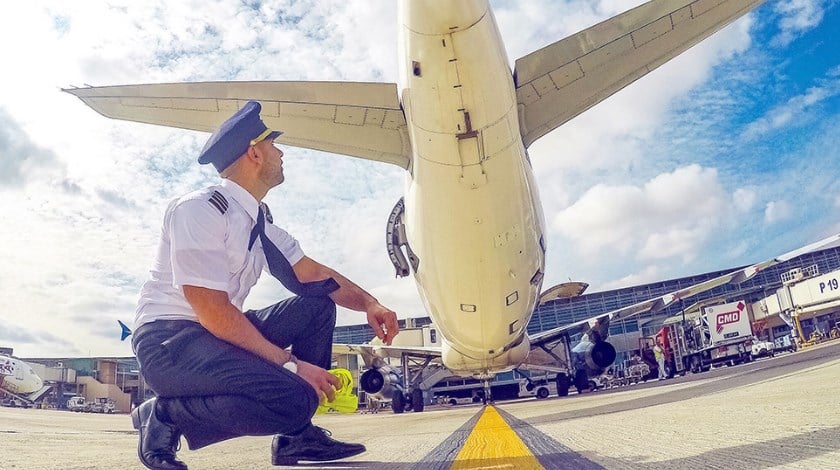 Francesco Mercorelli is a Senior First Officer for Small Planet Airlines with an estimate of 3,000 flight hours in his pocket. With a high following of 10k, he might be known to you as @italianpilot_ on Instagram, where he shares his life as a pilot and what the industry is like.

As an airline pilot, he is well-aware of the misconceptions that surround the idea of being one. As he expresses – aviation is not easily earned big money. Flying an aircraft comes with major responsibilities; you’re entrusted with the lives of hundreds of people on board. No two flights are the same, as you maneuver different models of aircraft through varying weather conditions.

It is a long and difficult road to become a successful pilot. Certainly not everyone can be one. We asked Francesco if he could share the experience he accumulated throughout the years and give advice to all who wish to become an airline pilot.

Firstly, could you tell us about yourself and how did you get interested in aviation?

Aviation became my life ever since I was introduced to it as a child. My father is a retired Captain of Alitalia airlines, therefore whilst growing up I was able to gain an insight into the world of aviation. Afterwards it was really easy for me to fall in love with this world. When I was 16 years old I started training for my ATPL in Rome and completed it in 2010. Almost immediately I got my first job as a commercial pilot with an Italian airline and started flying with a McDonnell Douglas MD-82. A year later I continued flying on an MD-83 for another small airline. A few years passed and unfortunately, due to my type rating and low flight hours, I was grounded. I spent around two difficult years training in order to get back onto the flight deck. With a new type rating of Airbus A320 I once again started flying with local Iranian airlines based in Tehran. It was an amazing experience to be flying in that part of the world, but after a year I realized I was really missing Europe so I applied for a job at Small Planet Airlines, a fast-growing leisure charter airline. Today, I am a senior first officer on an Airbus A320 based at Amsterdam and have close to 3,000 flight hours.

What do you believe are the most important skills/qualities for a potential pilot to display in general?

I have noticed that the general idea of being a “pilot” is surrounded by a lot of misconceptions that it is easy money. My goal is to show people, what the industry is actually like. This industry is about passion and determination to work hard for your goals in life. Of course, to become a pilot you will require a certain set of skills, a few of which are technical, but many of which can be applied also to day-to-day life: confidence, multi-tasking, time management, problem solving and adaptability.

What do you believe is the thing that most pilots struggle with throughout the selection and training phases before becoming a pilot?

It is not necessarily easy to fly an aircraft, but for most it is not a hard task. Of course, each student has different capabilities, but in general, flying an aircraft is not as complicated to deal with if you are willing to learn. I can assure you that this job is all about experience. But I believe that the biggest struggle comes to those who don’t have a deep-rooted desire to become a pilot. You must understand that airline industry has considerably developed over the last few decades, as has the role of pilots. Much of the emphasis is now placed on the flight crew’s soft skills. Pilots are required to manage a multitude of situations that can be influenced by a vast range of factors on a daily basis, ranging from: technical issues, weather, passengers, air traffic control, language barriers, and other crew members. All of this, of course, whilst operating and managing a highly complex multi-million pound aircraft, potentially with hundreds of people on board. At times, it can be a struggle, but the end goal is a seat in the cockpit! Just ask yourself “WHY do I want to become a pilot?”

Once you start working for an airline, what would you say are the most important factors in order to make a successful career as an airline pilot?

Airlines are looking for you to demonstrate that you have all of the required non-technical skills to be successful in the role of a pilot (regardless of how long you have been a pilot). The top attributes are: problem solving, situational awareness, teamwork, leadership, prioritization, delegation, communication, planning, flexibility, reliability, empathy, being business-oriented and customer-minded, adverse to risk, motivated and passionate. The assessment section that people most commonly struggle with is the competency-based interview that checks all of these attributes.

As a pilot with multiple experiences working for other airlines, what was the process and reasons for choosing to work for Small Planet Airlines?

What was the biggest highlight of your career at Small Planet Airlines? What was the most memorable peak moment?

One of the most memorable moments that I can remember is the one where I received the news that I was successful with the initial assessment in Vilnius, March 2016. And I also can’t forget when we did our last flight to Cephalonia Island (Greece). All of the airport’s ground staff were saying goodbyes and crying. Sometimes this is more than just a job!

Being a pilot is a challenging line of work. What was the biggest challenge you have experienced as a pilot for Small Planet Airlines? How did you handle those challenges?

Every day is a challenge in Small Planet Airlines, each flight is a mission. We are mostly flying to the more popular holiday destinations, but there are many other remote airports we service, with non-precision approach, usually in the middle of mountains and often during the night! So if you want to join us, be ready to quickly improve your flying experience! A big challenge that I can remember was for sure the first non-precision approach in Innsbruck (Austria) with the bad weather, and performing a night landing in Kos (Greece), a very nice “black pool” runway.

Flying for Small Planet Airlines is a one of a kind experience. I learned so many different things that I could never believe that aviation can be such a complex environment. For almost a year I have traveled in so many cars and planes, stayed in so many hotels and worked along with so many great people. I am proud to be part of this family. All of the colleagues are really nice and the management and office staff are really kind and available to help you immediately in all cases. Small Planet Airlines is like a little “Google” – the potential of this airline is incredible and in fact it is growing very quickly every year.

What advice would you give a person with aspirations of becoming a pilot?

The first piece of advice is to make sure and find out as much about the profession as you can. Get close to the planes, talk to pilots who have already been through training – most pilots will be extremely happy to share their own experience and pass on advice to help you. Go to career shows and ask all the questions you need to until you have a full picture about a pilot’s life: the highlights and challenges, the lifestyle, the salary and training. So, do your research, get your medical certificate, safeguard your investment and finally – don’t give up!