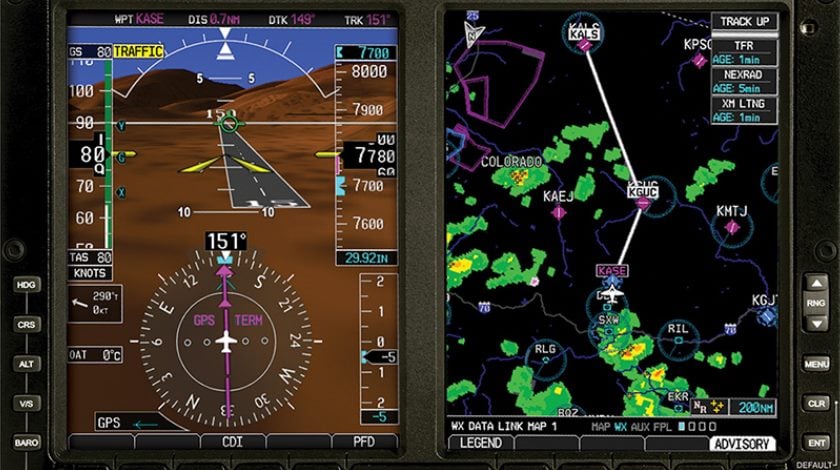 Modern avionics are at once both complex and capable, and a significant amount of the training time to qualify on a new airplane involves learning how the avionics work. At the same time, there are common avionics platforms found in many different airplanes, and pilots can take advantage of manufacturer training programs and events such as those offered by Garmin for its integrated flight decks (G1000 through G5000) and GTN navigators and G500/G600 multifunction displays. AIN attended a two-day class for the G500/G600 and GTNs and found it to be not only an excellent introduction to a new avionics system but also a deep dive into how to make the system perform.

The class was led by Chris Dickson, a pilot who joined Garmin at its Chicago retail storefront then moved into product support; he has been a Garmin instructor for the past two years. The eight students in the class had widely varying backgrounds, but the common thread was that most were flying airplanes equipped with G500/G600 displays and GTN navigators, although one student, a Twin Commander owner, was there just for the GTN portion. Four of the students fly 36-series Bonanzas. One student, a former Air Force B-52 and T-1 (Beechjet 400) pilot, had been hired to fly a G500/GTN 750-equipped Piper Malibu, and he admitted that all of this “general aviation stuff” was completely new to him. He had tried learning the Garmin avionics by reading the manuals but was struggling.

The best feature of the Garmin training is that each student works behind full-size demo units of the G600 and GTN 750 and 650. This helps the student build muscle memory on how the units operate, and for those who flew their airplanes to Olathe, Kan., for the class, a higher level of confidence and familiarity with their avionics for the flight home. The only feature missing from the demo units is an autopilot interface, but otherwise they operate like the real avionics. The classroom is in the same building as Garmin’s aviation product support operation, and we were encouraged to talk with the support personnel if they had any questions or troubleshooting issues that the instructor couldn’t answer.

For most of the students, even those who had flown with the equipment for many hours, the training clearly revealed many features they weren’t familiar with. Dickson’s explanation of the flight path marker on the synthetic vision display was an excellent introduction, and essential because many cockpits now have this technology. Another important topic that he helped clarify is Garmin’s design for page groups. Dickson explained that groups are like chapters in a book (controlled by the outer MFD knob), and within each group are pages (selected by the inner MFD knob). Students were given plenty of practice with page groups, as they play a central role in many of Garmin’s avionics.

In fact, one of the important takeaways from this training is that Garmin design features span a range of products, from the Garmin Pilot iPad/Android app to the G3X/G500/G600 MFDs and GTN navigators, and even the G1000 through G5000 integrated flight decks. Familiarity with any of these products will help pilots transition into aircraft equipped with other types of Garmin avionics.

This was especially apparent during the flight planning training. On the second day of training, students exercised they new skills by planning and flying some scenarios, and these helped not only cement the information but also allowed to make mistakes and learn how to fix them. Also there was an opportunity  to practice modifying flight plans, including ATC reroutes. The touchscreen GTN navigators allow setting up of user-defined holds (as do the G1000 through G5000 flight decks), and this was a neat feature to try out.

After two days of training, all of the students had a much better understanding of the products. But as with any training program, they also came to appreciate that there is a lot more to learn. The G500/G600 and GTN combination, a popular upgrade path for moving from older instruments to a modern glass cockpit, is powerful and capable, and taking some training in how to operate these avionics is essential.