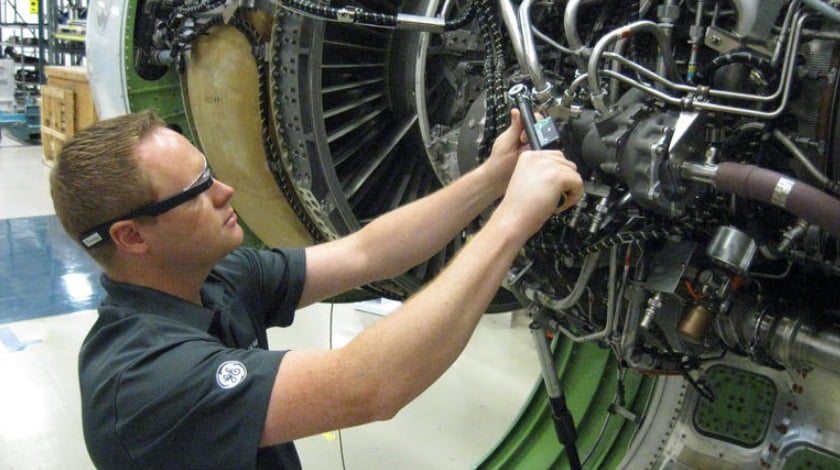 Properly tightened and torqued B-nuts are essential to engine fluid lines and hoses on a properly functioning engine. To achieve the right tensions, mechanics need to check the maintenance manual frequently, so the process takes a lot of back and forth away from the engine. To improve this process, GE Aviation has just piloted a process with mechanics using augmented reality.

The six-month pilot program­—using Glass Enterprise Edition smart glasses (the 2.0 version of Google Glass) along with Upskill’s Skylight software for augmented reality devices and Atlas Copco’s digital torque wrench—involved translating work procedures into a file that could be interpreted by Skylight and fed into Glass, having 15 mechanics use the system and analyzing the results. Sixty percent of the mechanics involved said they prefer the augmented-reality process to the traditional way of doing things, and 85% believe it also will reduce errors.

“A novel part of our idea was to integrate a smart tool with the Google Glass and Skylight software,” so the team spent time with Atlas Copco figuring out what the right digital torque wrench is and how to integrate it all together, says Ted Robertson, GE Aviation’s manager of maintainability and human factors engineering. Upskill handled most of the integration piece, he says.

“I feel like once we’ve done it, it will be easier and faster to get another use case or test up and running, which is what we plan to do,” says Robertson.

During the pilot, the team needed to determine how to get everything operating—and make it comply with GE’s IT and security requirements, in this case—so having established a road map for that should make subsequent projects shorter. GE’s pilot took about six months.

Jay Kim, chief strategy officer with Upskill, says that 3-6 months is a common time frame for smart-glass projects. “A lot of it is the upfront overhead associated with IT integration,” along with identifying the right use cases, storyboarding them, implementing the project and then running the assessment, he says.

Kim notes that, like GE Aviation, Upskill tries “to integrate the people who are doing the work with the digital systems governing their workflow and then pushing it back into the system.”

GE is now interested in rolling out the Glass and Upskill’s project to manufacturing and maintenance applications—from engine module assembly to maintenance, on-wing support or training. “The on-wing team is very interested in the technology,” Kim notes, because they could work collaboratively with offsite-experts who are continents away, through a camera if necessary.

The ultimate goal of the augmented reality project is “ensuring 100% . . . that the work is done right each time,” says Kothari.