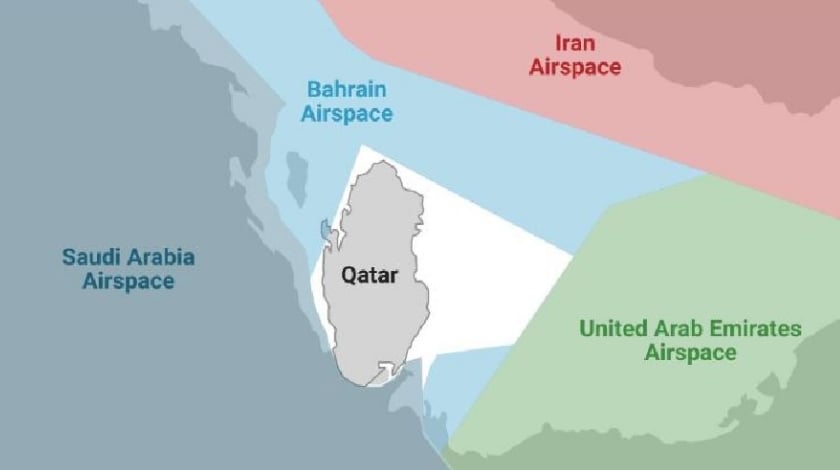 The airspace ban by the UAE, Saudi Arabia and Bahrain is likely to ground Qatar Airways aircraft, particularly its narrowbody fleet, according to analysts.

Following the severing of diplomatic ties with Qatar on Monday by three Gulf countries, along with Egypt, over its relationship with Iran and support for terror groups, the CAPA Centre for Aviation (CAPA) released a report on Monday.

Qatar, with very little airspace of its own, is largely surrounded by Bahrain airspace. A slither on the south is managed by Saudi Arabia while the UAE is on the eastern border, leaving Qatar Airways with restricted space for flights.

“Losing Saudi airspace is significant, but even worse would be losing Bahrain airspace since it practically encircles Qatar,” the report said, revealing most Qatar Airways flights to Europe use the northern airspace of Saudi Arabia.

“Closing of Saudi airspace requires timely and costly diversions to other Middle East destinations as well as to most of Africa.”

Qatar Airways has a larger presence in Saudi Arabian, UAE, Bahrain and Egypt than airlines from those countries have in Qatar. It has 29 percent more seats to/from Dubai where it operates narrowbody aircraft.

In contrast, Emirates has uses all-widebody and even deploys the A380 on Dubai-Doha route. Besides, Qatar Airways has multiple more seats to Saudi Arabia than Saudia has to Qatar.

Cost will go up

Speaking to Arabian Business, two aviation analysts said the cost of serving long-haul flights for Qatar Airways will rise, with Iran likely to become a transit point for Doha flights. Airlines from the Gulf countries have already announced suspension of their service to and from their respective countries to Qatar until further notice. Saj Ahmad, chief analyst, StrategicAero Research, said Qatar Airways will now have to redirect its flights to avoid flying in the banned airspace.

“Qatar Airways will be hit hardest since it will have to re-route flights over Saudi and the UAE on its long haul missions, adding fuel, time and costs,” he said.

“Equally, its narrowbody fleet will end up parked at Doha, and ramp space there is not exactly plentiful and so again they will have to redeploy them somewhere, if at all possible.”

“If matters aren’t controlled in the right manner through a mature dialogue, we do believe the biggest benefactor of such a restriction shall be European, Asian and Latin American carriers,” he said.

Martin said aviation will stand to be affected collectively in the Middle East, eventually leading to loss of jobs, economic sustainability and regional growth. The two analysts, however, believe Iran will become a dominant aviation player following the diplomatic row.

“Even Etihad, flydubai, Emirates, Air Arabia, flynas and Saudia will all have to avoid Qatari airspace,” Ahmed said.

“Though it is not big, but it is going to add to flight times and of course, not flying to Doha means passengers will have to find alternative connections to get to and from Doha,” he added.

Ahmed said Iran will become a “transit point” for flights to Doha.

Martin added: “We certainly are likely see the emergence of Iran as the dominant player in aviation as a result of their far better geographic and strategic position being sandwiched between Europe, Asia, CIS, Russia and Africa, if the current situation isn’t resolved maturely.”

Other key airspaces that could come under consideration are Iraq and Kuwait, but a lot would depend on how the issue evolves, he said.