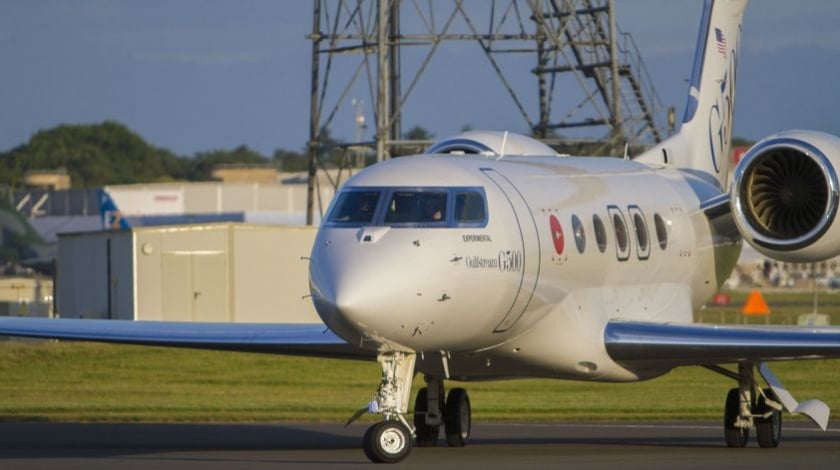 Gulfstream Aerospace Corp.’s all-new G500 made its European debut last week, traveling across the Atlantic to participate in the Gulfstream static display at the 2016 Farnborough International Airshow.

The G500 flew nonstop from Savannah/Hilton Head International Airport to Farnborough Airport in 6 hours and 55 minutes, accomplishing the 3,732-nautical-mile/6,912-kilometer flight at an average speed of Mach 0.90 and altitude of 45,000 feet/13,716 meters. Gulfstream pilots Scott Evans, Brian Dickerson and Sean Sheldon were in the flight deck with Flight Test engineers Darren Klaus and Ray Beach on board.

“Since the first flight of the G500 in May 2015, we have been steadily expanding the test fleet and progressing toward the aircraft’s certification in 2017,” said Mark Burns, president, Gulfstream. “I’m pleased that we were able to bring the G500 to Farnborough to show the aircraft’s industry-leading safety, performance and comfort to our customers.”

The G500 participating in Farnborough is the fourth test aircraft and serves as the test bed for avionics, water ingestion and select systems (water/waste, lighting, fire protection).

The fifth test aircraft, P1, is at the Savannah Completions center, where it is receiving a full interior that will be used to test the form, fit and function of various cabin elements.

At this point in the test program, the G500 flight-test aircraft have completed expanding the flight envelope, which includes flutter, altitude, Mach and temperature, as well as testing of initial handling qualities, ice shapes and stalls.

Gulfstream has conducted more than 50,000 hours of ground testing in its state-of-the-art labs to support the aircraft’s continued development. The company recently completed ultimate load testing, taking the G500 structural test article beyond 150 percent of limit load. It is set to begin a multi-year fatigue testing program that will simulate three lifetimes of airframe operation.