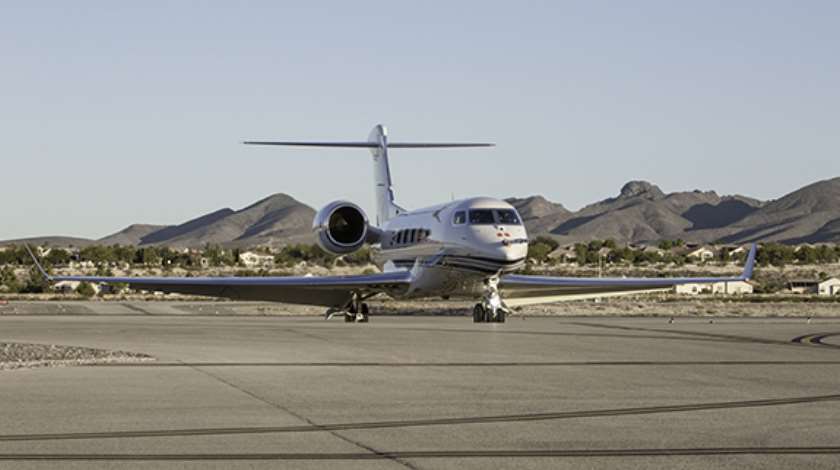 The G500 flew from Savannah/Hilton Head International Airport into 75-knot headwinds and arrived at Henderson Executive 4 hours and 36 minutes later, accomplishing the 1,630-nautical-mile/3,018-kilometer flight at an average speed of Mach 0.85 and altitude of 45,000 feet/13,716 meters. Gulfstream test pilots Scott Martin and Scott Evans were at the controls, with Flight Test engineers Paul Ludlow and Nathaniel Rutland providing on-board support.

“Delivering on our promises is a tradition at Gulfstream, and we look forward to doing the same with our new generation of aircraft, the G500 and G600,” said Dan Nale, senior vice president, Programs, Engineering and Test, Gulfstream. “The robust testing we accomplished on the ground and in the air since announcing the aircraft helped make this achievement possible. We are proud to give customers, the business aviation industry and the public a chance to see the G500 in person at NBAA.”

The G500 flew to Las Vegas with a significant amount of flight testing equipment on board:

The first G500 test aircraft, T1, is focused on flight performance and controls and has achieved a number of flight-test milestones since its first flight on May 18. The aircraft has flown more than 160 hours, completed 44 flights and reached an altitude exceeding 50,000 ft/15,240 m. Its longest flight was 5 hours and 22 minutes. T1 has reached a top speed of Mach 0.995. Flutter and envelope expansion testing are in progress, and initial testing of the aircraft’s handling qualities and the high-speed and recovery stall system have also taken place.

In total, the G500 flight-test program consists of five aircraft, including a fully outfitted production aircraft that allows the company to test all the interior elements and complete integration of the aircraft systems with the passenger experience. T2 and T3 have been delivered to the Flight Test facility and are preparing for first flight.