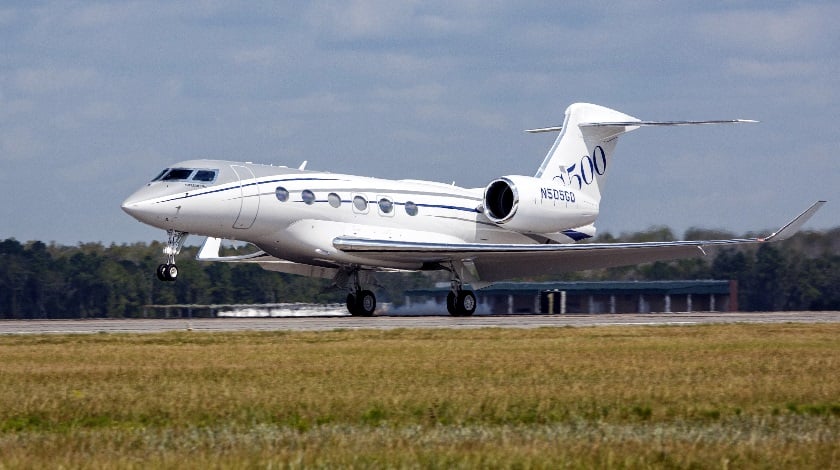 Gulfstream Aerospace Corp. today announced that the fifth Gulfstream G500 test aircraft has completed its first flight. The aircraft is the first production test aircraft to be outfitted with a full interior and serves as the testbed for the cabin.

The G500 departed from Savannah-Hilton Head International airport with Flight Test pilots Brian Dickerson and Andy Martin and Flight Test engineer Dustin Johnson on board. The aircraft climbed to a maximum altitude of 48,000 feet/14,630 meters and reached a speed of Mach 0.84 during the 4-hour and 5-minute flight.

“This first flight of our G500 production test aircraft marks another significant event for the G500 program and Gulfstream’s history of delivering on our promises,” said Mark Burns, president, Gulfstream.

“This fully completed aircraft focuses on the passenger experience and ensures that we deliver the most reliable, comfortable and functional cabin environment on both the G500 and G600.”

The G500 production test aircraft is testing the complete passenger experience for form, fit, function, noise and comfort, as well as the passenger interface with various cabin elements. Tests will include repetitive operations of all systems during many different phases of flight. The test aircraft will also be taken through a variety of missions, including overnight trips, hot and cold weather scenarios and turbulence.

“The many hours of interior testing this aircraft will undergo, from galley and lavatory use to comfort and cabin health during long flights, help us hone every aspect of flying on the G500,” said Burns.

The G500 seats up to 19 passengers in three living areas. The aircraft has forward and aft lavatories and a full-size galley that can be located either forward or aft. The G500 and G600 also feature an industry-leading cabin altitude and 100 percent fresh air that boost mental awareness and reduce fatigue. Gulfstream’s large oval windows, the same size as those on Gulfstream’s G650 and G650ER, allow for an abundance of natural light.

With five aircraft now flying, the G500 flight-test program continues to advance. In July, the fourth test aircraft made its first trans-Atlantic flight and European debut to appear at the 2016 Farnborough International Airshow outside of London. To date, the G500 test fleet has flown more than 320 flights and more than 1,300 flight hours. The aircraft has reached a maximum speed of Mach 0.995 and an altitude of 53,000 ft/16,154 m. The longest flight clocked in at 8 hours and 24 minutes.