Have Simulator, Will Travel 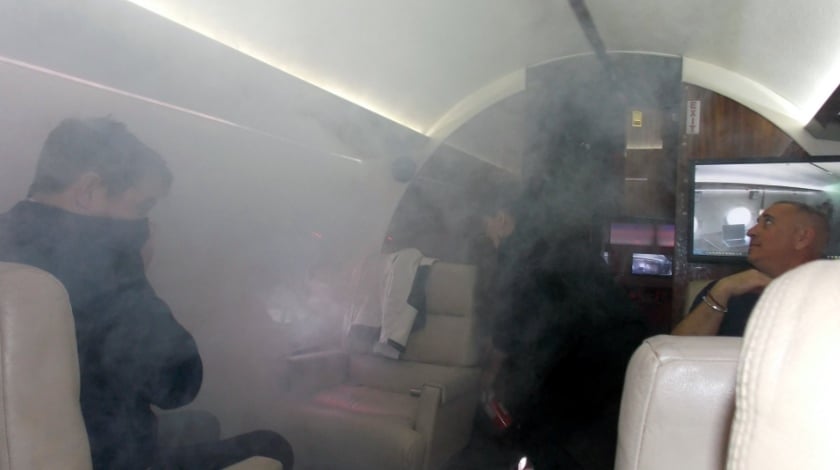 You are sitting in the comforts of the spacious business jet cabin when all of a sudden there’s a bang and a vibration and a wisp of smoke wafts up from the floor. The pilot comes on the cabin intercom and announces that the aircraft has lost an engine, while the flight attendant begins preparing for an emergency landing. As smoke begins to billow into the cabin, you brace for the worst…

That type of event is played out on most days of the year among Aircare International’s fleet of full-motion emergency simulators around the U.S.

In November, the company brought its newest device to Las Vegas to demonstrate its capabilities at the NBAA Convention. The trailer-mounted Facts VIII simulator is based in Long Beach, Calif., and can travel directly to customer hangars, to bring in-flight emergencies to life in realistic scenarios intended to expose trainees to calamities such as land and water evacuations, rapid decompression and cabin smoke. (Facts VII and Facts VI are fixed at AirCare’s training facilities in Dallas and Morristown, N.J., respectively). “We create a training environment as close as we can to the environment in an emergency,” said Brian Hayvaz, vice president of Aircare Facts training. “We want to teach and train the crewmembers to overcome the stressful situation around them and focus on getting the job done.”

The full-motion device is also the company’s most advanced version, using a combination of hydraulic rams and airbags to achieve the illusion of aircraft movement, either smooth or jarring. It is controlled by an operator in a small compartment just aft of the “mockpit” a generic cockpit with functioning communication equipment so the pilots can speak to the cabin. The operator can control motion, lighting, cue sound effects, and decide when and where to start the theatrical smoke. “We can turn on the smoke in different areas,” noted Martin Hamilton, the company’s vice president of business development and marketing, noting the operator can also regulate how much to produce.

Among the simulator’s trick props is a laptop computer that starts to smoke without warning, providing cabin attendants practice on how to deal with thermal runaway of a lithium-ion battery. All emergency equipment found on a real business aircraft such as fire extinguishers, fire containment bags, oxygen masks, first-aid kits, flashlights and automatic emergency defibrillator are on board, along with a life raft. “We attempt to eliminate pretending during drills,” said Hayvaz. “If the scenario is a smoke-filled cabin, we want the crew to find that extinguisher in the dark, remove it from its holder and pull the pin and squeeze the handle. Doing teaches much more than pretending.”

In the Las Vegas demonstration, after the flight attendant successfully dealt with the rogue laptop computer, the engine-out scenario began. The level of smoke pumped into the cabin soon reduced visibility to near zero, as the cabin lights flickered. The flight attendant quickly moved passengers to rear-facing seats, as the pilot gave updates on the imminent landing, adding that the aircraft had also suffered a hydraulic failure. As the motion became more frenzied, the flight attendant, barely visible through the haze, groped her way from seat to seat making sure passengers were belted in and instructing them how to brace properly for impact. Over the intercom, the pilot counted down to impact, and when it came it was as violent as one might expect from an aircraft skidding across a runway.

Amidst the grinding noises the device finally bounced and shuddered to a stop, after which the flight attendant opened the emergency window exit (one of the advancements of the Facts VIII is changeable window plugs to match different types of business jet) and began helping the passengers depart the smoky interior, repeating the rendezvous point to each as they clambered out onto the stub wing, blinking in the bright sunshine. For all involved, it was as close to a real aircraft emergency as they ever care to be.

Five minutes later, after the faux smoke was vented out, the simulator was ready to go again. “Typically in a classroom setting, they’ll go through a drill, they’ll all get out of the aircraft and go to a meeting place,” Hamilton told AIN. “Then we’ll come back to the main entrance and debrief on what went well, what didn’t we do well, before we get on and do it again.”

Other exercises involve water ditchings, with appropriate sound effects and a gentle rocking sensation when the simulated airplane comes to a halt. The Aircare staff can also provide training for emergency medical emergencies. “The training is not necessarily something that [an operator has] to do. There are always ways to cut corners on training, but we find some of the most safety-conscious flight departments want to do this and they want us to push them to get better. We’re really proud of that,” said Hamilton, adding that the program is in greater demand now as more companies tackle the requirements of IS-BAO Stage 3.