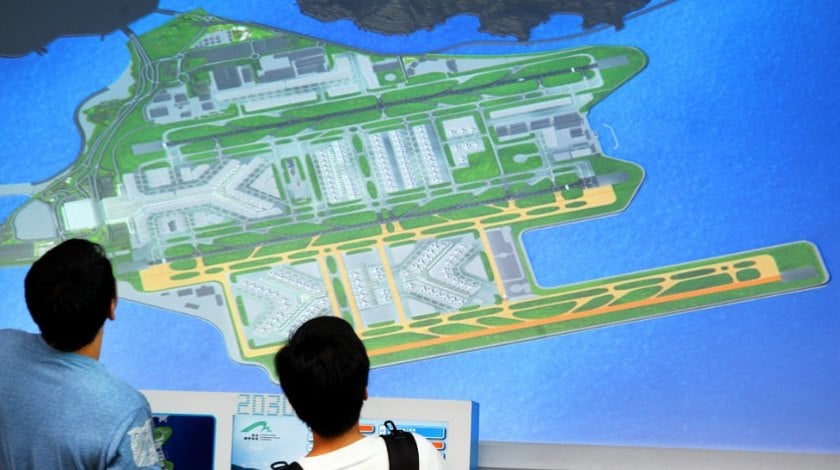 Air travellers will pay a fee starting from August to fund construction of the airport’s third runway when initial reclamation work begins on the project, the Airport Authority said on Monday.

Outbound and transit passengers will pay up to HK$180 towards the expansion at Hong Kong International Airport, which is due to be completed by 2023.

At a nighttime ceremony in the airport’s maintenance hanger, Cathay’s chief operating officer Rupert Hogg hailed the arrival of the first of the airline’s 48 Airbus A350s ordered, saying it would help boost the city’s economic development and international ­connections.

“This superbly efficient aircraft will help us further expand our global network and strengthen Hong Kong’s reputation as an international aviation hub, helping to oil the wheels of commerce and trade in our home city,” he said.

The aircraft can seat 280 passengers, only 5 per cent more than the aircraft it is replacing, which may do little to ease the shortage of runway slots for new flights and meet surging demand for travel.

New business class, premium economy and economy class seating has been installed and will be installed on existing Boeing 777 jets. Among the added features is high-definition in-flight TV. ­Cathay will start offering Wi-fi to passengers for up to US$19.95 on its longest flights. All packages will include unlimited data. The airline is also very close to announcing Wi-fi connectivity on the mainland, the company said. Most major airlines currently cannot offer internet service over mainland airspace.

Pilots and cabin crew will take off on the aircraft’s first commercial flights on Wednesday, headed for Manila and Taipei for training and to fine-tune the on-board service.

The arrival of the new Airbus long-haul plane has not been plain sailing, however. The delivery was delayed by three months as the plane’s European manufacturer and Cathay grappled over an issue with the supplier of the aircraft’s seats.

At home, the carrier remains at loggerheads with pilots in the company’s longest-running industrial dispute to date. Unions have banned pilots from becoming training captains who can train pilots on flying the A350, which has led to the airline curbing the plane’s international deployment in the near term.

According to sources training on the new jet, Cathay has 50 newly-qualified pilots for the plane as of this month but needs to train 240, or 20 pilots per plane, for long-haul operations in anticipation of the delivery of 12 of the A350 planes this year. But the airline is struggling to train enough pilots in the short term.

The jet will eventually be deployed on European and Australasian routes, starting with London Gatwick on September 2.