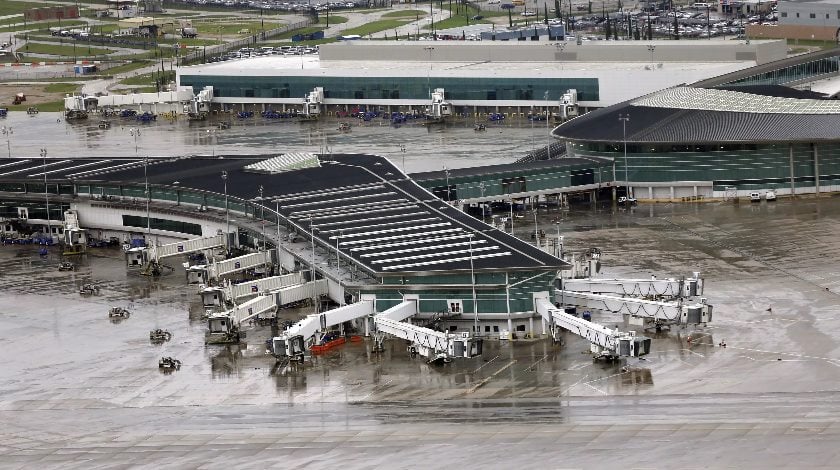 Houston Intercontinental Airport (IAH) and Houston Hobby Airport (HOU) have reopened to handle limited domestic flights after being forced to close Aug. 27 because of severe flooding in the aftermath of Hurricane Harvey.

“The plan is to begin a phased return to service, with full service expected by this weekend,” the Houston Airport System, which operates both airports, said in a statement, adding, “Many roads around the city of Houston are still unsafe for travel. Therefore, we urge all passengers to take their time arriving to the airports and to solidify a safe route to and/or from our facilities.”

Nearly all roads to and from the airports are now clear, with just one road to HOU remaining flooded, the Houston Airport System said.

Chicago-based United Airlines, which has a major hub at IAH, and Dallas-based Southwest Airlines, the leading airline at HOU, are the carriers most affected by the closures, with both expected to incur revenue hits in the third quarter because of the hurricane. Together, the two airlines have a more than 80% market share in Houston.

United said a “limited number” of its flights are “operating between Houston and other major US airports,” but cautioned that “many flights to and from Houston continue to be canceled … Road conditions around [IAH] continue to be poor, so travelers should carefully plan their travel to and from the airport.”

United, which has waived change fees for flights to/from Houston during this period, said it recommends that passengers booked on an “upcoming United flight that includes travel through Houston … [postpone] travel until conditions improve. The Houston area is extremely taxed and may not have the resources to offer hotel and restaurant services to Houston visitors.”

Although HOU is open, Southwest said its “scheduled flights to/from Houston Hobby remain suspended,” adding, “Please do not attempt to reach HOU at this time.” The airline said it is “planning to resume limited operations [at HOU] on Saturday, Sept. 2.”